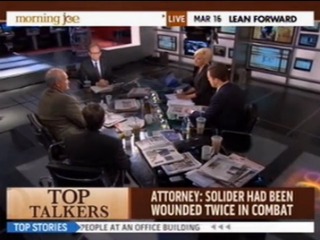 On Friday, the team at Morning Joe discussed newly-revealed information about the American staff sergeant accused of opening fire on Afghan civilians, including his lawyer’s assertion that he had been going through marital difficulties and had been given news that his close friend had been gravely injured merely a day before the shooting.

The soldier, who had enlisted after 9/11, had also evidently suffered head and foot injuries as the result of roadside bomb and had not expected to be re-deployed.

RELATED: Obama Apologizes To Afghanistan: U.S. Takes This As Seriously ‘As It Was Our Own Citizens’ Murdered

“The New York Times is reporting,” host Mika Brzezinski told viewers, “that the suspect could be moved to a prison inside the United States as early as today. U.S. officials tell the New York Times that the soldier had been drinking alcohol the night of the shootings with two other troops, both of whom are now facing disciplinary action. The military’s investigation into the incident coincides with two new challenges to the U.S. strategy in Afghanistan. President Karzai is demanding that NATO pull back its troops from rural areas as part of a quicker overall withdrawal. He’s also calling for the coalition to transfer security to Afghan forces in 2013 instead of 2014. Meanwhile, the Taliban announced it is halting peace talks with American officials.”

Panelist Mike Barnicle felt that, in the soldier’s case, the prosecution “ought not to rest just on this soldier’s shoulders; it should go down the chain of command.”

Willie Geist, meanwhile, added that “I think putting any of this on his wife and their marriage is pretty absurd.”

As for whether this shooting will constitutes a “historic moment” in this war, panelist Jon Meacham replied that, “it depends on what happens with the strategic questions afterward. We are clearly at an ultimate chapter, one hopes it stands in the cultural imagination of Afghanistan. There are, tragically, every war has its atrocities, and so, in fact, stand out as symbols of what can happen when you have those extraordinarily combustible circumstances all put together.”