Witness Recounts Brown Shooting to MSNBC: Saw ‘Fire Come Out of the Barrel’ 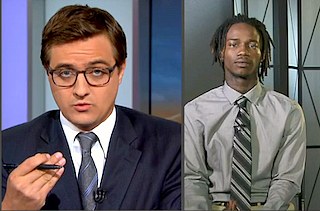 22-year-old Dorian Johnson told MSNBC host Chris Hayes that he had been with Michael Brown during the altercation with police that resulted in Brown’s death from police gunfire. Johnson recounted the incident to Hayes Monday night, contradicting the police narrative that Brown tried to secure the unidentified officer’s weapon during a struggle.

In a more detailed interview with MSNBC’s Trymaine Lee, Johnson gave a moment-by-moment reconstruction of the incident, in which he said the officer told the two to “Get the fuck on the sidewalk,” and had almost pulled away before reversing and asking the men to repeat a comment. According to Johnson, when the officer tried to open his door it hit Brown and bounced closed, at which point the officer grabbed Johnson by the neck and the situation quickly escalated into gunfire.

“I could see the muscles in his forearm,” Johnson told Lee. “Mike was trying to get away from being choked. …It’s like tug of war. He’s trying to pull him in. He’s pulling away, that’s when I heard, ‘I’m gonna shoot you.’”

“I seen the barrel of the gun pointed at my friend,” he continued. “He had it pointed at him and said ‘I’ll shoot,’ one more time. I seen the fire come out of the barrel.”

Johnson said Brown attempted to tell the officer as he ran that he was unarmed, but the officer kept shooting.

Johnson’s attorney Freeman Bosley said the police had not interviewed him yet.

Watch the clip below, via MSNBC, and read the more thorough interview here: