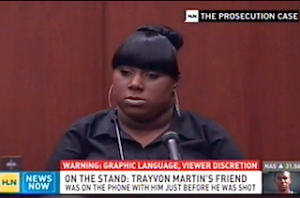 On the third day of testimony in the George Zimmerman murder trial, the prosecution called what could be the most pivotal witness of all: Rachel Jeantel, the friend who was on the phone with 17 year-old Trayvon Martin until moments before Zimmerman shot and killed him. In the early part of her testimony, Jeantel described her conversation with Trayvon, in which he notices a man looking at him, a man Jeantel says Martin described as a “creepy, white, kill-my-neighbors cracker,” and a “creepy-ass cracker,” to which she joked that he “might be a rapist.”

The credibility of Jeantel’s testimony is crucial, because it establishes George Zimmerman as the aggressor, and contradicts the defense’s contention that Mr. Zimmerman did not pursue Trayvon Martin after the police dispatcher instructed him that they didn’t need him to do that. The phone call also represents a two-minute overlap between the time Zimmerman hung up woth the dispatcher, and when he made contact with Trayvon Martin.

The prosecution asked Rachel Jeantel what Trayvon Martin was complaining to her about on the phone, as he walked home.

“That a man just kept watching him,” she replied.

“He said the man looked creepy?” the prosecutor asked.

“Creepy, white, kill-my-neighbors cracker,” Jeantel replied, and when asked to repeat her testimony a few times, added, “He looked like a creepy ass cracker.”

Jeantel’s testimony bogged down for several minutes because the defense and the court reporter were having trouble understanding her testimony.