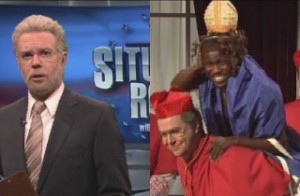 The internet was up in arms today after President Obama gaffed during a press conference on the sequester and created an entirely new science fiction telepathic power called the “Jedi Mind Meld.” Sci-fi nerds everywhere know the about the telepathic powers of Jedis in Star Wars and Vulcans in Star Trek but what about our esteemed CNN political pundits, David Frum and Paul Begala on CNN’s Situation Room with Wolf Blitzer?

Not only did Blitzer take a solid three minutes out of his program today to talk about how Obama upset sci-fi nerds everywhere, including this one, over his mixing up the terms but he even showed clips from the films to explain the differences. Blitzer showed footage from Star Wars Episode IV: A New Hope where Obi Wan Kenobi casually performs a Jedi mind trick on Imperial Stormtroopers at a checkpoint and a clip from the new Star Trek film where Spock performs a Vulcan mind meld.

For those who didn’t understand the clips that Blitzer showed allow me to help. A Jedi mind trick is when a Jedi uses the powers of the force to make somebody do something they want them to do. It is typically done with a wave of the hand before the trick. A Vulcan mind meld occurs when one embraces the face of another and their minds merge in order to share thoughts. In some situations the meld only allows one person to look into the mind of other and sometimes the meld is a fusion of their minds for variety of purposes. A Vulcan mind meld rarely occurs between a Vulcan and a human.

After showing several tweets from outraged nerds, some calling (jokingly?) for Obama’s impeachment, Blitzer asked his two guests what they made of confusion where Frum made a quip about how being president takes away from your TV watching. Begala took the opportunity to pour some love on Obama and compare him to Spock like others have before.

“I think the president is Mr. Spock. He’s all brains and all rational and logical and yet he’s dealing with people that are wholly irrational,” said Begala.