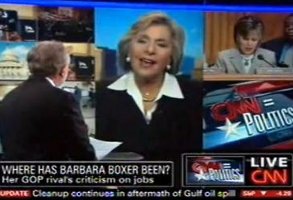 Yesterday, Wolf Blitzer had Sen. Barbara Boxer (D-CA) on CNN for a response to accusations from her opponent, Carly Fiorina, that she “has no experience in the real world creating jobs” and instead has spent her time “voting for more taxes.” Boxer disputed this, saying she’s voted for huge numbers of tax cuts throughout her career, but some of her numbers seemed off – and Blitzer, both rightly and wrongly, called her on it.

The trouble began when Boxer said she’d voted for over $2 trillion worth of tax cuts over the course of her career, with the largest of those being in the stimulus bill. Blitzer, though, mistakenly interpreted this as her saying she supported $2 trillion in tax cuts fro the stimulus alone. This, of course, would be impossible, seeing as how it would be well over twice the value of the entire bill.

However, this seemed to throw Boxer off in a big way – she started stumbling over words and numbers, and began saying things she didn’t mean to, like that she supported $1.2 trillion in tax cuts for the stimulus (still more than the value of the entire bill). Blitzer actually slipped up a bit himself when he said that if a third of the stimulus were tax cuts, it would add up to “$200 or $300 million” (actually billion), but it took an uncomfortable while for Boxer to realize what she’d meant all along (to her credit, when she did, she corrected herself in full).

Video of the segment below. However lost Boxer might have been at one point, we do enjoy hearing the stimulus bill referred to as “the stim.”