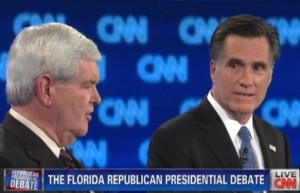 At Thursday night’s Republican Presidential Debate in Florida, former Gov. Mitt Romney tried to play coy when asked about an ad that accuses former Speaker Newt Gingrich of calling Spanish a ghetto language, telling moderator Wolf Blitzer “I haven’t seen the ad, so I’m sorry, I don’t get to see all the TV ads,” and later added, “I doubt that’s my ad.”

Several minutes later, Blitzer circled back, and said that CNN had verified that the ad was Romney’s (not a SuperPAC’s), and asked him to explain, again.

It was something of a two-fer for Blitzer, forcing Romney to take responsibility for the ad, while making Gingrich explain these comments, from a 2008 speech:

When forst asked about the ad, Romney played dumb, responding, “I haven’t seen the ad, so I’m sorry, I don’t get to see all the TV ads. Did he say that?”

Gingrich first tried to explain (without using the word “ghetto”)  that he wasn’t talking about Spanish, but about every language other than English. However, Gingrich posted an apology in Spanish on YouTube several days after those 2008 remarks.

Romney then prefaced his own “English only” position by saying “I doubt that’s my ad, but we’ll take a look and find out.”

Several questions later, Blitzer circled back. “We did double check, just now, Governor, that ad that we talked about…we double checked, it was one of your ads, it is running here in Florida on the radio, and at the end you say ‘I’m Mitt Romney and I approved this ad.”

Romney, again, acted as if he was unfamiliar with the quote. “Let me ask you a question — let me ask the Speaker a question. Did you say what the ad says or not?”

Gingrich responded “I did not say it about Spanish. I said in general. About all languages. We are better for children to learn English in general. Period.”

It’s unclear how “Yours isn’t the only language I think is ghetto talk!” will go over as a bumper sticker.

Here’s the exchange, followed by the Romney ad:

VOICEOVER: “Newt Gingrich claims to be a Reagan conservative. Let’s review the facts. Gingrich said that he would not change the failed policy of Barack Obama on travel to Cuba that serves to fill the regime’s coffers and increase repression on the island. I don’t think Reagan would agree with Gingrich.”

VOICEOVER: “Gingrich profited from Freddie Mac, one of the reasons for the mortgage collapse that has caused so much damage in our community.”

VOICEOVER: “Reagan would have never partnered-up with Nancy Pelosi to advance the extreme left agenda, as Gingrich did.”

VOICEOVER: “And Reagan definitely would have never offended us, Hispanics, as Gingrich did by saying that Spanish is the language of the ghetto. Now, searching for votes, Gingrich wants to change history but the facts speak for themselves.”

VOICEOVER: “Paid for by Romney for President, Incorporated.”

MITT ROMNEY: “I am Mitt Romney. I am running for President and I approve this message.”