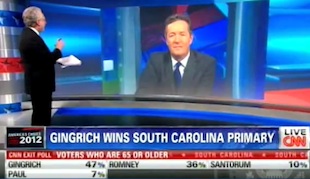 During CNN’s election coverage of the South Carolina primary results, Wolf Blitzer “corrected” Piers Morgan for saying fellow network colleague John King “attacked” Newt Gingrich when he asked the former Speaker of the House about the “open marriage” controversy. “I want to make one correction,” Blitzer acknowledged. “I know what you meant, but your wording wasn’t precise, when you said John King attacked Newt Gingrich. He asked the question, and you of course, as anyone knows, it’s one thing to ask a question of a candidate, an important question, but it doesn’t necessarily mean you’re attacking him.”

“No, I didn’t mean it like that!” exclaimed Morgan. “And let me say for the record, I thought it was a fantastic question and absolutely a valid thing to top the debate with. And it was probably the most talked about moment of all the debates that we’ve seen so far, but of course, it also had the effect galvanizing Newt Gingrich into this tour de force reaction to that question which I’m certain had a huge impact on his success tonight. So he ought to be really thanking John King. But you’re right, it wasn’t an attack, it was a very valid journalistic question.”

Morgan had earlier interviewed Gingrich’s daughters and said “Your father likes nothing better than when everyone is attacking him, whether it’s his ex-wife, John King, my colleague, quite rightly taking him on or Mitt Romney or whoever it is, your dad likes it when the bullets are firing at him.”