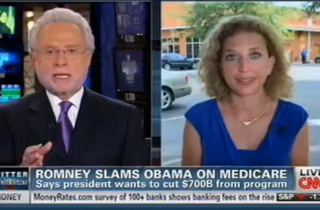 Blitzer began the segment by running an old clip of Rep. Ryan explaining to Blitzer that his proposed cuts would not affect current seniors or people near retirement, but rather it would “reform the programs for those of us under 54, because we know they’re going bankrupt, and put them on the path of solvency and sustainability.”

“Just to be precise,” Blitzer began, “he does call for dramatic changes for people 54 and under. Anyone 55 or older or any senior living in Florida right now, they have absolutely nothing to worry about because it would not affect them at all. You accept that, right?”

“No, Paul Ryan’s views on Medicare two years ago and how to shore it up were extreme and wrong then and they’re extreme and wrong now,” Wasserman-Schultz responded. “If Mitt Romney and Paul Ryan became president and vice president of the United States, they would be able to end the Medicare guarantee, shred the health care safety net that Medicare has provided for more than 50 years, and turn Medicare into a voucher program — leaving seniors really out in the cold because as health care costs grow larger than the voucher provides, seniors wouldn’t have enough money to cover their health care costs.”

“He says he’s not calling for any changes for anyone 55 and older,” Blitzer pushed back. “It doesn’t affect anyone who is receiving Medicare right now or those who have ten years to go. Explain how his recommendations for those under 55 impact them?”

“First of all, Mitt Romney and Paul Ryan presume people younger than 65 years old who have spent decades…” Wasserman-Schultz began before Blitzer corrected her, saying “He said 55.”

“Okay, so 55 and younger. We’ll start with that age,” she continued. “Those people have spent decades paying into Medicare. And because of the arbitrary cutoff of 55 years old that Romney has established that means we would no longer for those people have medicare be a guarantee. Instead, we would shred the safety net. It would be a voucher.”

“That’s only for people who are under 55 right now,” Blitzer pushed back. “Current recipients of medicare. He says that his proposal, and he spelled it out in the House Budget Committee: no one over 50 would be impacted by his recommended changes.”

“Here’s how,” the congresswoman began to explain, “because — first of all, we do care that we have a safety net in place in health care for people are 65 now and as they turn 65.”

“But they would continue to,” Blitzer corrected her.

“He says anybody over 55 is going to receive the same Medicare that they receive now,” Blitzer responded.

“But their plan ends Medicare as we know it,” she retorted.

“And that’s not okay,” the congresswoman said.

“Well, that’s a legitimate debate,” Blitzer conceded, adding that “I just want to make sure that you and he were on the same page that the changes he’s recommending will affect younger people, not those currently on Medicare or about to get Medicare.”

The congresswoman then explained that she believes Ryan’s plan will gut Medicare for current seniors because “by ending the guarantee [for younger people], by causing Medicare to be a voucher instead of a guarantee, you’re going to cause insurance companies to cherry pick the healthiest seniors, and you’re going to cause Medicare to be financially more unsustainable. Because you’ll have only the sickest seniors left in Medicare, and that will affect seniors on Medicare right now.”