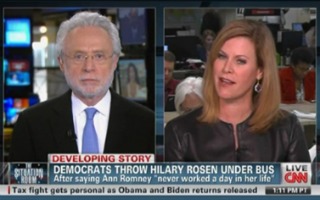 Stephanie Cutter, deputy campaign manager for President Barack Obama’s 2012 reelection effort, appeared on CNN’s The Situation Room with Wolf Blitzer where she was asked why the campaign threw Hilary Rosen “under the bus.” Cutter replied that Rosen had apologized for the statement and called the controversy surrounding her remarks a “faux debate” and a “faux argument.”

Blitzer asked Cutter why she, as well as so many other Obama administration and campaign officials, were so quick to dismiss comments made by Democratic strategist Hilary Rosen regarding Mitt Romney’s wife Ann Romney’s career. He put a graphic up of a twitter message Cutter posted after Rosen made her remarks in which she appeared to join the rest of the Obama team in distancing themselves from Rosen.

@Messina2012 Families must be off limits on campaigns, and i personally believe stay at home moms work harder than most of us do.

“Here’s the question,” Blitzer asked. “Why were all of you so quick to throw Hilary Rosen under the bus?”

“Well, let me first say that Hilary is a friend,” said Cutter. “I’ve known her a long time and she’s apologized for that remark. But, you know, I tweeted that out because I disagreed with it. I do believe that family has to be off limits. As someone who worked for the First Lady in the last campaign, I think that it’s very dangerous to start going after families.”

Cutter went on to praise mothers and say that she believes that, of the mother she knows, “often times I believe they work harder than I do.”

“The entire debate distorted the real issues in this campaign,” Cutter then said. “This was sort of a faux argument yesterday. The real issue is what are we going to do to help secure women in this economy, and that’s what Mitt Romney doesn’t want to talk about.”

Cutter went on to describe how the Romney campaign had been actively trying to leverage and amplify the Rosen comments for political gain. “They had a conference call yesterday with surrogates to hit back on this faux debate,” said Cutter. “They had two surrogates on that conference call who voted against Lilly Ledbetter [equal pay legislation].”

“What is their strategy to put women back to work,” Cutter asked. “We’re waiting.”

[President Obama] has done everything to ensure that women aren’t a special interest group,” Cutter continued. “Helping them get into math and science jobs; competing with men. Ensuring they have college affordability and can pay their student loans and have things like child care. All the things that help them balance work and raising their families. That’s what women need in this economy, not some faux debate.”