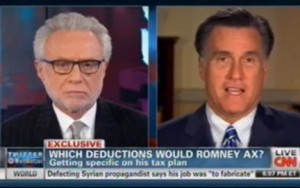 As the fallout from last week’s debate continues, President Obama‘s campaign has lost the post-debate narrative thread, with a lot of help from the mainstream media, and a little from within. Mitt Romney won that debate on the strength of stunningly immense lies (which the President, to be fair, failed to counter), the largest of which the media fact-checkers have now decided is an Obama lie. CNN has led the charge, but when given a chance to turn things around on Piers Morgan Tonight, Obama Deputy Campaign Manager Stephanie Cutter fumbled.

At issue is former Massachusetts Governor Mitt Romney’s claim, at the debate, that he isn’t proposing a $5 trillion tax cut, a claim which he never specified (or was made to specify) whether it pertained to his 20% across-the-board rate reduction alone, or the net effect of his rate cut plus the offsets he has promised, but also not specified. That unspecified detail is what has allowed Romney to force fact-checkers and interviewers into fits of tail-chasing that has them all calling President Obama a liar now.

Following the debate, almost every fact-checker (including CNN’s John Berman and Tom Foreman) ruled that Obama had falsely claimed that Mitt Romney was proposing a $5 trillion tax cut, because, they said, Obama was ignoring the offsets that Romney has promised (but not specified), which would make the amount lower. On its face, this is sheer idiocy, since this is never how the media has ever discussed any piece of legislation. President Obama’s proposed $447 billion American Jobs Act was completely offset (with specifics), but no one ever described it as the Zero Dollar American Jobs Act. So, these fact-checkers were already stretching to help Romney.

They were also lying. Every time the President talked about the $5 trillion cut, he also mentioned the offsets that Romney promises, but hasn’t specified. The fact-checkers just lied.

It gets worse, though, and here’s where CNN gains culpability over the other horrible fact-checking jobs that were done on this. Out Front host Erin Burnett confronted Obama Deputy Campaign Manager Stephanie Cutter with CNN’s nonsense lie that “Mitt Romney has not promised (a $5trillion tax cut) because he’s going to also be closing loopholes and deductions, so his tax cut wouldn’t be anywhere near that size.”

What Cutter should have said was, “Yes, the President stipulated that at the debate, at least three times, genius. But you have to assign a dollar amount to that 20% cut before you can decide how to offset it.”

Still, it was Burnett and CNN who cooked up the nonsense that a tax cut is only valued at its pinkie-sworn net effect, and the lie that President Obama failed to mention the offsets that Romney has promised. Although she should have made it clear that the campaign has always stipulated that (that’s what The Math is), Cutter was just reacting to garbage. Forgiven.

But then, that “stipulated” quote was picked up on by the Romney campaign, and the media, as an “admission” that the President’s $5 trillion claim was false. On last night’s The Situation Room, Wolf Blitzer tried to nail Romney down on the first part of The Math, the dollar value of that 20% rate cut, and Romney evaded the question with the lie that CNN had invented:

I hate to get on Blitzer’s case here, because he was doing such a great job. He almost forced Romney to answer whether his 20% rate cut would “add up to the $4.8 or $5 trillion that’s been estimated,” but then he let Romney pull the lie rip cord: (emphasis mine)

Well, actually, the President’s charge of a $5 trillion tax cut is obviously inaccurate and wrong, because what he says is, ‘All right, let’s look at all the rates you’re lowering,’ then he ignores the fact when I say, ‘I’m also going to eliminate credits and exemptions.’ He ignores that part.

Romney then goes on to falsely claim that this was “corrected” by Cutter. As you can see, Burnett later played the clip, and chirped, at the end, “Well, she did use the word stipulate.”

Now, it’s possible that Wolf didn’t actually see the segment Romney was referring to, but I’m pretty confident he saw the debate, and heard the President say “Now, Governor Romney’s proposal that he has been promoting for 18 months calls for a $5 trillion tax cut on top of $2 trillion of additional spending for our military. And he is saying that he is going to pay for it by closing loopholes and deductions.”

Yet Blitzer failed to call Romney out on the lie, and even gave up trying to get a dollar figure for that 20% rate cut out of him. Unbelievable.

Then, on Tuesday’s Piers Morgan Tonight, Stephanie Cutter got a shot at a do-over, when host Piers Morgan (who should have called out the self-evident lie himself) confronted her with Romney’s claim that President Obama “ignored” his promise to offset the tax cut. “He said you said (the $5 trillion tax cut) was wrong,” Morgan said.

Instead of saying “No, Mitt Romney is lying, the President didn’t ignore his promise to offset the tax cut, he brought it up three times,” Cutter jumped ahead to a deconstruction of the net effect. She was not understanding what the President was being accused of, or what she was being accused of “correcting,” and the net effect of that was a muddied explanation that left the viewer with the impression that maybe President Obama did try to pull a fast one:

It’s clear that CNN (and every other fact-checker) has no intention of correcting the grievous error they made in their fact-check, and why should they? The Obama campaign’s deputy campaign manager has now declined, twice, to even dispute it. Instead of being in such a rush to get to her talking points, Cutter should have been listening to what she was being asked. She’s taken a clear lie by Mitt Romney and turned it into a push, at best.