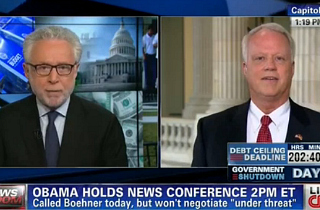 On CNN Tuesday afternoon, Wolf Blitzer challenged Rep. Paul Broun (R-GA) to defend his comments that House Speaker John Boehner (R-OH) will face “rebellion” if he compromises on government shutdown. “You obviously hate Obamacare,” the CNN anchor said to the congressman at one point during their tense exchange.

After Broun explained his belief that the Affordable Care Act (known colloquially as “Obamacare”) will “destroy jobs, budgets, and the quality of health care” in America, Blitzer pressed: “But you know it’s the law of the land. It was passed by the House and Senate and signed into law by the president. The Supreme Court approved it saying it was constitutional. The president was reelected by 5 million votes so it is the law of the land right now.”

“It’s the flaw of the land in actuality,” Broun shot back.

Later on, after Broun further asserted his anti-Obamacare stance, Blitzer interrupted to quote the congressman’s own words in the National Review: “You said ‘America is going to be destroyed by Obamacare so whatever deal is put together must at least reschedule the implementation of Obamacare. This law is going to destroy America, and everything in America, and we need to stop it.'”

“Do you still stand by all of those pretty extreme words?” the CNN host asked.

“I know you say it’s destroying jobs, but you’re not saying America,” a frustrated Blitzer interjected. “The United States of America, this country of ours will be destroyed by Obamacare. That’s what you were quoted here as saying. I want to give you a chance to revise and amend, if you’d like to.”