Wolf Blitzer Grills Trump On Endorsement, Asks: Is This Going To Help Or Hurt Romney?
video

Wolf Blitzer Grills Trump On Endorsement, Asks: Is This Going To Help Or Hurt Romney? 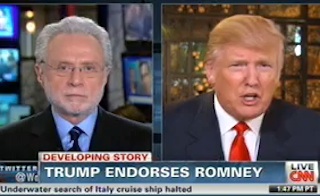 “I guess it’s going to help because everyone wants it,” Trump replied. “When I was thinking of running, Meet The Press did a poll and I was number one the day before I decided to go and do The Apprentice…I was leading in all the polls. A recent poll came out of which Independent would you most like to see run and I was easily number one in that one. So you can quote all you want, but the polls that matter are those two polls. When I was running, I was number one the day before I left. Check out Meet The Press, your favorite show!”

“My favorite show is The Situation Room,” Blitzer quipped. “But that’s another story.”

Blitzer also asked Trump about Romney’s comments to Soledad O’Brien that he wasn’t concerned with “the very poor.”

“I think it was very unfair reporting actually because he said I have a safety net and I’ll fix it if necessary, and i thought that was — there are many people that don’t understand what the press is talking about,” Trump observed. “I always did nicely in English and if you set that sentence run-on, as did he, some people don’t let it run on, there was — it could have been said differently, i guess. Everything could be said differently, but he talked about a safety net and he talked about fixing it if he had to.”

Watch Trump defend his endorsement of Romney below via CNN: