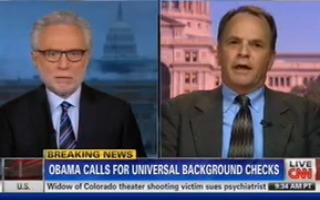 Wolf Blitzer grilled Republican Representative Steve Toth (R-TX) Wednesday about why he does not support universal background checks for gun sales. “What if some crazy guy…wants to go to a gun show?” Blitzer asked. “He can go buy a gun.”

The interview comes in the wake of President Obama‘s announcement that he is instituting 23 new executive actions to curb gun violence, among them, universal background checks.

RELATED: Obama Attacks Pro-Gun ‘Pundits’ Who Will Scream ‘Tyranny’ To ‘Gin Up Fear’ And ‘Higher Ratings’

According to Toth, only “lawful” people purchase guns at gun shows. Blitzer immediately cut his statement short with the clipped response that there are “plenty” of people who are not lawful.

“Right now, you can be on the no fly list, you’re not allowed to board a plane, but you can go to a gun show and buy a gun. Is there a contradiction there?” Blitzer asked.

Toth did not answer but continued to push the notion that no criminal has ever bought a weapon at a gun show. “Wolf, show me one time one of these criminals has gone to a gun show and committed a crime,” he said.