Wolf Blitzer: “I Began To Wonder, Am I Going To Get Out Of North Korea?” 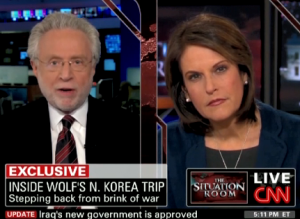 CNN’s Wolf Blitzer returned home to the U.S. yesterday after an historic–and at times, harrowing–trip to North Korea. In talking about the trip with CNN political analyst Gloria Borger, Blitzer described the tension between North and South as the worst–and scariest–since 1953.

The crisis, which Blitzer described as feeling in North Korea very much like a country on the verge of war, described how tough it had been to get a visa to travel into the North, and then–with tensions rising–how he ultimately feared he might not be able to get back out:

BLITZER: Yes, I was convinced that it was the worst crisis since 1953 in the Armistice.

Once the South Koreans said they were going to go with the live fire exercise and the North Korean military issued a statement saying if they did that, there would be a military response from North Korea with catastrophic consequents, I got very, very nervous.

I had a tough time, after all these years as a journalist, getting a visa to get into North Korea.

BLITZER: But immediately, I was afraid I wasn’t going to get out because I immediately assumed they would shutdown the airport and I would be stuck in North Korea if there were all out hostilities.

For the North Korean military to back down later and say, you know, these exercises weren’t worth a military response, that’s significant. We’ll talk a little bit about that in the next hour.

But I will point out, Gloria, that at one point, it looked like we weren’t going to get out, and I was thinking about other alternative routes. I know Governor Richardson was as well, maybe even finding a way to drive out of North Korea through China if, in fact, that was possible.

But we were pretty worried.

BORGER: You were worried that they were going to keep you there. I mean, was that a tense moment? What was the tensest moment for you, both as a journalist and somebody who was there accompanying Governor Richardson?

BLITZER: Well, I think the tensest moment for me, personally, was when I started watching North Korean television and listening to their radio. As someone who has covered the communist world back in the ’70s and ’80s during the height of the Cold War, and I began hearing some martial music on North Korean television. You know, very patriotic, very military. And I said to myself, are they preparing the North Korean people for some sort of war, once you hear that kind of music.

Normally, they have very patriotic music going on North Korean television, but it’s lovely and they’ve got women dancing and stuff like that. But this suggested to me that maybe there was a change and at that point I said, well, maybe the North Koreans are serious and they’re going to start something. Once I heard that music, I began to wonder, am I going to get out of North Korea?

And then there’s this: Blitzer revealed that despite the remote, closed society, people in North Korea knew Blitzer and The Situation Room.