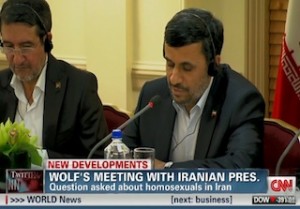 Almost four years ago to the day, Iranian President Mahmoud Ahmadinejad was invited to speak to students at Columbia University, causing a pretty big stir among conservatives who thought it untoward for any U.S. university to give the combative world leader a platform to spew anit-Israeli rhetoric. Turns out, the most notable quote from that event was Ahmadinejad’s assertion that “In Iran, we don’t have homosexuals like in your country. In Iran, we do not have this phenomenon.” During an interview with CNN’s Wolf Blitzer yesterday, Ahmandinejad again plead ignorance to any Iranian gays.

Blitzer was joined by fellow CNN cohorts Piers Morgan and Erin Burnett in interrogating the enigmatic Iranian president, when he made reference the to “no gay” comment that was reported by ABC News back in September of 2007:

When asked about the death penalty Iran imposed on homosexuals, Ahmadinejad discussed the death sentence for drug smugglers. When pushed by moderator and acting dean of the School of International and Public Affairs John Coatsworth, the Iranian president said: “In Iran, we don’t have homosexuals like in your country. In Iran, we do not have this phenomenon. I don’t know who has told you we have that.”

Ahmadinejad’s response? “In Iran, homosexuality is looked down upon as an ugly deed.” He then ceded something of a recognition of at least the possibility of Iranian gays adding “Perhaps there are those who engage in such activities and you may be in contact with them and more aware of them.” In other words, Ahmadinejad effectively rebuffed Bilitzer by saying “we’re not gay, YOU ARE!”