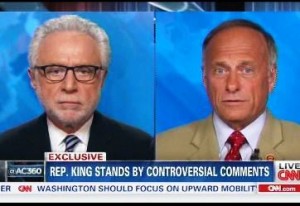 Republican congressman Steve King has gotten a lot of heat over his comments that when it comes to illegal immigration, for every one valedictorian there’s one hundred more with “calves the size of cantaloupes because they’re hauling 75 pounds of marijuana across the desert.” King’s remarks gained negative reactions even from his own side of the aisle, with John Boehner and Eric Cantor slamming them. King sat down with Wolf Blitzer to continue defending himself and to fire back against his critics.

King insisted the data backs up what he said, and fired back at his fellow Republicans and Democrats (including one Democrat who thinks he’s an ignorant racist) by charging that they never watched the video or read the transcript of their remarks and likely reacted to an “edited version” read to them by a reporter. He stuck by his main point that “dozens and scores of people… are smuggling drugs across our border.” He cited conversations he’s had with border control agents to make it clear his stats weren’t “made up out of thin air.”

Blitzer grilled him on whether they said specifically that there are 100 drug smugglers going across the border for every one valedictorian. King smiled slightly and insisted he was “clear about what I said.” He made it clear that it’s “never the kids’ fault” for their parents’ actions, but at the same time, when you legalize illegal immigrants you legalize people making money smuggling drugs into the country. He said, “It should not offend anybody because it’s also objective.”