Woman Who Posted About ‘N*gger’ Obama’s ‘Assassination’ Says She’s Not A Racist: ‘I Take It Back’ 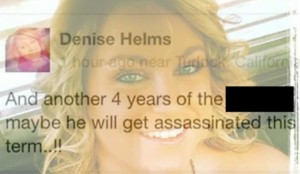 As if to personify the panic brought on by President Obama‘s demographically overwhelming reelection victory, a California woman named Denise Helms took to Facebook Tuesday night to commiserate with fellow embittered white people, posting “Another 4 years of this nigger. Maybe he will get assassinated this term.”

She was subsequently fired from her job at Cold Stone Creamery, but insisted to a local news crew that, although “the assassination part is kind of harsh,” she’s not a racist. Asked “But you equate the President with the n-word?” Helms replied, “Sure.”

Helms told Fox 40, outside her soon-to-be former place of employment, that “the assassination part is kind of harsh … and I’m not saying I would go do that by any means, but if it were to happen, I don’t think I would care one bit.”

She also claimed that she wasn’t a racist, and that she has friends of “many different nationalities,” but also that she equates the President with the n-word.

As racists everywhere scramble to figure out where they can go buy ice cream now, it’s worth wondering why this Fox 40 reporter didn’t ask the natural followup question to 22 year-old Helms: Do you know what a “racist” is?

Apparently, Helms looked it up in the dictionary after her firing, because when Fox 40’s Ben Deci tracked her down the next day, she was slightly more apologetic. Deci asked “Are you a racist?”

“It does,” Helms generously allowed, “but I am not. That’s what everyone’s been telling me, ‘You know, what you said sounded so racist,’ and it does, and you know, I take it back. If I could erase what I said, I would.”

Set aside, for a moment, the horribleness of this person, or the fact that she takes back her declaration with all the sincerity she would muster to take back an ill-fitting thong. Is this what the discussion of racism in America has been reduced to? An actual reporter, even a local Fox reporter, has to describe “Another 4 years of this nigger. Maybe he will get assassinated this term” as “sounding” racist? No wonder the American media has been so in denial about racism.

This isn’t one of those “some say…while others say” kind of things; calling for the assassination of “this nigger” is, in fact, racist. Of course, Denise Helms doesn’t think she’s a racist. Most racists don’t think they’re racist, they just think they’re telling the truth. However, like Denise Helms, if enough people are telling you that you sound racist, maybe it’s not just them, it’s you.