‘Women Should Not Be There!’ Hannity Spring Break Segment Turns into Fiery Shoutfest 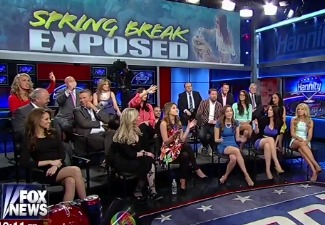 All week Sean Hannity has been covering what really happens on spring break, and Friday night the week it all culminated with an in-studio audience to debate spring break. Things really took a turn when Gavin McInnes argued there’s a big difference between letting girls and guys go down to enjoy spring break. He said, “My daughter, there’s no way in hell she’s going there, but with my sons, I hope they have a great time.”

Well, when Hannity asked the women on the panel if they’re “mad” at him for saying that… well, it was a very clear majority.

Later on in the show, after Bill Cunningham came to his defense, McInnes insisted there’s a difference because for guys, “the worst that can happen is some guy pulls a gun on them and they lose the 40 dollars in their swim trunks,” while “the biggest problem with women is rape.” Jedediah Bila brought up poisoning that could affect men, and another panelist cried, “Who is raping the women? It’s the men!”

McInnes also riled things up when he said, “The women there are human garbage whose parents don’t love them.” Chloe Melas fired back and told him, “You think guys only want to hang out with their boys on spring break? They want girls there too!” She argued if he’s really concerned about rape, he should be worried about sending guys down there too, because “I don’t think a girl is going to date rape me, I think a guy is going to date rape me!”

You can watch the chaos unfold below, via Fox News: