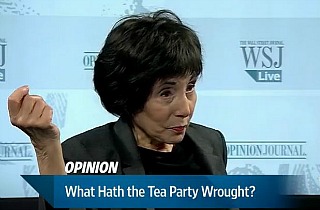 On Tuesday, the Wall Street Journal’s Dorothy Rabinowitz tore into the tea party members of the Republican Party for forcing the government into a potential shutdown over the Affordable Care Act. Rabinowitz told WSJ editorial board member Mary Kissel on Tuesday that she celebrates the battle that has been joined between who she described as the “sane” members of the GOP and the “deranged, extremist believers” aligned with the tea party.

“Aren’t tea party senators like Ted Cruz (R-TX) and Mike Lee (R-UT) just speaking for the American people?” Kissel asked as both senators were mounting a “filibuster” in defense of a plan to defund the ACA.

“Whether the government shuts down or not, we will live,” she added. “But what needed to be met – what needed to be joined was the battle between the sane elements of the Republican Party and the massive range of extremist, deranged believers – false leaders – who have just taken over.”

“Do you really want to smear the tea party with such a broad brush?” Kissel asked.

She added that the conservative base of the party derives their power from “threatening” legislators who diverge from their brand of “zealotry.”

Kissel challenged Rabinowitz on her assertion that the tea party is composed entirely of unhinged representatives noting that Sen. Marco Rubio (R-FL) counts himself a member of the tea party ascendency. “And where is he?” Rabinowitz asked. “He just isn’t insane enough.”

She called the idea that the government should be shut down a “maniacal effort” and noted that the good intentions that the tea party set out with has been “permanently” erased by its extremist members in government.

Watch the clip below via WSJ: