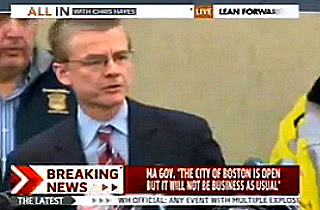 We all already know that President Barack Hussein Obama never, ever, nevernay calls anything an “act of terror,” because he obviously hates white people, but at a press conference on the Boston Marathon bombings Monday evening, that unreasonable phobia of talking out of your ass made the jump to F.B.I. Special Agent In Charge Rick DesLauriers, who avoided the phrase like he was The Fonz trying to apologize. While DesLauriers admitted that the attack would be investigated through the Boston Joint Terrorism Task Force, he repeatedly referred to the bombing as a”crime,” and would only allow that “it is a criminal investigation that has the potential – that is a potential terrorist investigation.”

Sure, he threw in a bunch of “blah, blah, blah” about gathering “facts” and “information,” but he refused to call it an act of terror! Everybody freak out!

By “freak out,” of course, I mean try a tall, icy carafe of Shut The F**k Up With Lemon™. The right wing in this country has an obsession with racing to be the first one to declare something an “act of terror,” and to call President Obama out for not doing so. Matt Wilstein ably parsed through the history of this idiocy, which has some minimal resonance in the greater context of the debate over the branding of terrorism (as a “war” or a “crime”), but has diddly-squat to do with how the government should respond in the hours following a tragedy (that’s right, I said it!) There are many excellent reasons not to call something an “act of terror” in the hot minutes following an event like this, reasons too numerous to list, but which include maybe we don’t want the guy(s) who did it to know that we’re on to them, or maybe we don’t want to give an at-large lone nut an inflated sense of power, or maybe, maybe, it’s not really an act of terrorism.

See, “act of terror” is a descriptive phrase that easily fits this situation, but which carries with it the baggage of all the assumptions about terrorism. If you don’t understand the difference between treating something as an act of terrorism, and it actually being terrorism, get thee to a DVD of Die Hards I and II. It implies motive and organization, and also carries with it the suggestion of an ongoing threat. While authorities are urging vigilance, calling something “terrorism” if you don’t know that’s what it is only serves to alarm people unnecessarily. Perhaps that’s what some people want their president to do, but generally, that’s not a productive activity.

In fact, the only upside to calling this an “act of terror” before all the facts are in is to mollify the copious amounts of people who insist that this is absolutely necessary, because Freedom! Just for them, I think the President and the people in charge of the dictionary should forever strike all forms of the word “terror,” and replace them with something else, because if you find out that there are God-knows-how-many people dead and injured in a bombing attack that people are being raced away from in wheelchairs, and the first thing you think of is taunting the President beccause you don’t like him, you are a grade-A asshole, and deserve no mollification. You deserve to wake up in an anxious sweat wondering “WHY?!? Why wouldn’t he call it ‘terrorism?’ Aren’t all the best marathoners from…KENYA?”