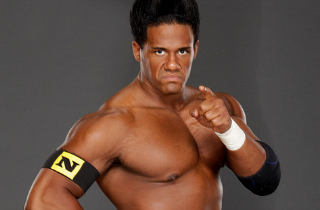 When a TMZ reporter approached World Wrestling Entertainment star Darren Young to ask whether a gay wrestler could ever be successful within the organization, he did not expect to get the answer he did.

“Absolutely,” Young said with a chuckle while retrieving his bags at Los Angeles Airport. “Look at me. I’m a WWE Superstar and, to be honest with you, I’ll tell you right now, I’m gay, and I’m happy. Very happy.”

The TMZ cameraman was audibly stunned, telling Young he had no idea the wrestler was gay. Young replied that his sexuality shouldn’t really matter.

“I guess if you want to call it ‘coming out,’ I really don’t know what to say it is,” he explained. “I’m just letting you know that I’m happy who I am. I’m comfortable with myself and I’m happy to be living the dream.”

He continued: “Some people might not like it. Some people will like it. I’m here to please myself. I’m here to be happy. I’m hoping to make a difference. It’s very important to me to make people understand that someone’s sexual preference shouldn’t really matter. It should be about the person.”

In a statement, the WWE told the Huffington Post they are “proud” of Young for coming out as homosexual in an aggressively masculine sport:

“WWE is proud of Darren Young for being open about his sexuality, and we will continue to support him as a WWE Superstar. Today, in fact, Darren will be participating in one of our Be A Star anti-bullying rallies in Los Angeles to teach children how to create positive environments for everyone regardless of age, race, religion or sexual orientation.”

Watch below, via TMZ: