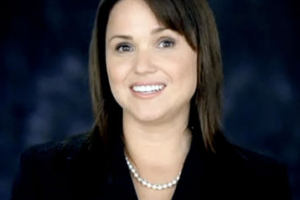 And you thought the passing of election day meant you’d heard the last of Christine O’Donnell for the year. Ha!

Thanks to the librarians at Yale, we can tell you that O’Donnell’s classic line “I am not a witch” from the best political ad of the year has tied for first place in Yale’s “Top Ten Quotations of 2010.”

According to Yale associate librarian Fred Shapiro, who’s been selecting quotes since 2006, O’Donnell’s witch quote “was such a remarkable unconventional quote to be a part of the political discourse.”

The only quote to come close–okay, to tie–was BP CEO Tony Hayward‘s tone deaf “I want my life back,” from the gulf oil spill. The late charge of TSA classic “If you touch my junk, I’m gonna have you arrested” launched passenger John Tyner‘s line into third place.

Here’s the complete list, from the Yale Daily News

(TIE) “I’m not a witch.” Christine O’Donnell, television advertisement, Oct. 4.
(TIE) “I’d like my life back.” Tony Hayward, comment to reporters, May 30.
“If you touch my junk, I’m gonna have you arrested.” airline passenger John Tyner, remark to Transportation Security Administration worker at San Diego airport, Nov. 13, 2010
“Don’t retreat. Instead – reload!” Sarah Palin, Tweet, March 23.
“Chi! Chi! Chi! Le! Le! Le! Los mineros de Chile!” Chant at Chilean mine rescue, Oct. 13.
“I hope that’s not where we’re going, but you know, if this Congress keeps going the way it is, people are really looking toward those Second Amendment remedies. They’re saying: My goodness, what can we do to turn this country around?” Sharron Angle, radio interview in January.
“We have to pass the (health care) bill so you can find out what is in it.” Nancy Pelosi, speech to National Association of Counties, March 9.
“I’m going to take my talents to South Beach.” LeBron James, television broadcast, July 8.
“You’re telling me that the separation of church and state is found in the First Amendment?” Christine O’Donnell, Delaware senatorial debate, Oct. 19. (The Associated Press reported the quote: “So you’re telling me that the separation of church and state, the phrase `separation of church and state,’ is in the First Amendment?”)
“They should never have put me with that woman. … She was just a sort of bigoted woman who said she used to be Labour.” Gordon Brown, comments about a voter he met while campaigning for British general election, Apr. 28.:

The winning quotes will appear in next year’s edition of the Yale Book of Quotations. Watch the award winning ad below: