Yeah, Jon Stewart Should Stay Exactly Where He Is
Counterpoint

Yeah, Jon Stewart Should Stay Exactly Where He Is 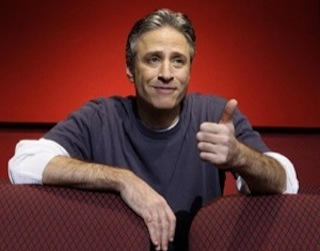 Imagine I walked into Steven Spielberg’s office today and ordered him to stop producing Transformers movies.

“Why?” he’d ask (assuming he hadn’t already had me tased into a smoking pile of ashes).

“Because they’re tired!” I’d respond. “I didn’t like the third one!”

“Well,” Spielberg would respond. “Did you like the first two?”

“Of course not. Why does that matter?”

That little hypothetical was basically what my colleague Frances Martel’s screed this morning about Jon Stewart was like.

Look, I love Frances. We’ve worked together for about 50 years now (time moves at different speeds when you’re forced to watch cable news all day every day). And during this time we’ve had a number of arguments about Jon Stewart because I’m a huge fan of Stewart and his show and, in case you couldn’t read between every venom-covered line of her column, Frances hates him. Like maybe “holds an absurd grudge on him because she blames him for getting Tucker Carlson taken off TV about a million years ago” hates him.

And that’s the problem. Frances would have you believe that she wants Stewart off TV because he’s grown stale, that he hasn’t reinvented himself as well as those titans of comedy…Madonna and Glenn Beck. However, while entertainers should always try to in some way adapt to changing times, she argues that The Daily Show has lost “much of its charm.” But what if she never thought it had any charm to begin with?

How can someone who never liked something in the first place seriously judge whether or not it’s not as good as it once was? If someone stabs me in the eye, waits a decade, and stabs me again, I’m going to have a hard time critiquing the guy’s stabbing form.

But, lets give her the benefit of the doubt, assume that Frances actually believes this and that its not a weird Crossfire-obsessed axe. Is the show actually stale? Well, Jon Stewart has been doing The Daily Show for 12 years. Sure, it’s still incredibly funny and gets tremendous ratings and tons of awards, but Frances might have a point. That sure sounds like a long time, right? Well, maybe. Until you, say, look at the fact that David Letterman is about to surpass Johnny Carson’s show record and is still inspiring an entire generation of talk shows.

Like Letterman’s show, Stewart’s was so groundbreaking that its reverberations are still being felt. Whether you disagree with him politically or not (and, before anyone comments to say I’m wrong, think about why you actually feel that way), Jon Stewart really revolutionized political humor in America. The way his show dissected the day’s news seriously and sharply every single day completely changed our world of nine-joke Jay Leno monologues and weekly SNL commentary.

And Frances may not think The Daily Show deserves the Madonna seal of reinvention approval, the show has adapted in hugely important ways. Namely; its connection to the Internet. After witnessing the huge Viacom/YouTube nonsense, The Daily Show was one of the first series to begin serving up its episodes in small embeddable chunks online. That may not seem, to Frances, as groundbreaking as two guys on CNN yelling at each other, but as someone who can actually watch The Daily Show without flying into some kind of frothing political rage, I remember how huge it was for television as a whole when we were first given the chance to watch last night’s Daily Show online…THE VERY NEXT MORNING.

Also, with a Democratic President, as opposed to popular opinion, The Daily Show is more important than ever. Every few weeks, Stewart makes a harsh critique of President Obama and you can sense the tension in the audience. Not because they disagree. Because they trust Stewart to tell it like it is and the truth in his jokes hurt as much as the truth always should.

Which is really the biggest problem with the “stale” argument. Even if Stewart was less funny than he used to be (not my opinion), the trust his audience has for him and the seriousness with which he treats that blessing is invaluable. And that trust takes years to develop. If you start chucking people out just because their show has been on an arbitrary amount of years, there’d be no one on television any of us could feel any connection to.

Really though, I’m wasting my time here because I think she just hates Jon Stewart, wants him off TV and that her column was more a personal opinion disguised as some kind of comedy critique (she is sitting across from me and vehemently disputes this). And so, if I really wanted to write a suitable response, I just had to type two words and call it a day: