Yes, Alex Jones Is Still Nuts. Want Proof? Here’s Him Going Bonkers On Google & Facebook: ‘Use ‘Em Like A Toilet!’ 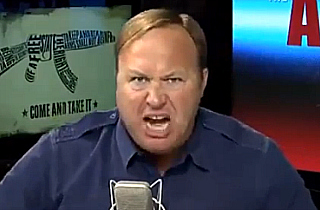 This latest winner comes courtesy of MofoPolitics, who flagged down a video of Jones angrily firing off at Google, Facebook, and YouTube for being “front operations” for the Central Intelligence Agency.

While addressing user concerns with Facebook and other social media outlets, Jones did one of his signature “take the volume up to 11” moves and fired off this hilarious tirade:

So… if understood correctly, Mr. Jones would like for us to use social networking sites to jack the system hard, but make sure we hate them and spit on them while we jack them. Roger that!

Oh, what’s that? Now you want to turn this into a generic invective against all your favorite bugaboos?

“This is a war! They’re killing kids everywhere with GMO and vaccines knowingly. This morning they had jets out spraying chemtrails everywhere. It’s a public G.O. engineering program — partially declassified and the public doesn’t even know about it! You think you’re in Kansas? You’re not in Kansas anymore!”

Jones then cited an InfoWars (his own site) article suggesting that Google is purposely trying to kill traffic to Jones’ site and the Drudge Report by telling Google Chrome users it has been infected with malware. Of course, what’s not clear is how many people actually received these warnings, or whether the warning images were just clever photoshops made by an InfoWars fan in his mom’s basement. How do we know that InfoWars didn’t create these images to make us think Google was the CIA front as a distraction from InfoWars’ own rogue CIA operations?!?!

Nevertheless, here comes that fiery rant against Google you’ve all been waiting for:

“Google is the one jacking and breaking through your pass codes. And spying. And [Google CEO Eric] Schmidt says, ‘You shouldn’t visit anything you don’t want me to see.’ On a power trip. What a joke! By the way he only sold 10,000 of his book. What a joke you are, scumbag. Just because you can run a CIA criminal front, doesn’t mean you actually ever did anything, little man! Hope you’re cozy under the black wings of the New World Order!”

After he calmed down a tad, Jones then cut to an article entitled “Mark Zuckerberg Awarded CIA Surveillance Medal.” That’s frightening, right? Fits the InfoWars narrative pretty well. Too well, one might say.

Well, that’s because it’s a fake article. Writes the author in the last paragraph: “Hope you enjoyed the spoof folks. I thought it was great.”

But whatever, man. Enjoy this video, y’all: