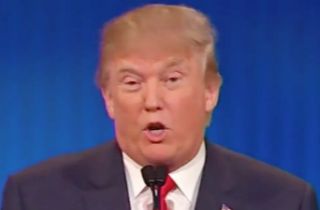 Donald Trump said in an MSNBC interview Friday morning that he didn’t remember having said any of the sexist remarks Fox host Megyn Kelly accused him of saying during Thursday night’s debate. “The question on the women, I didn’t say many of those things,” he said on Morning Joe. “They said something and they were giving out some words and I don’t remember that on The Apprentice.”

Trump later repeated the denial on ABC’s Good Morning America. So did he say all the things Kelly accused him of saying? In a word: yes.

Trump indeed called Rosie O’Donnell a “fat pig” during their 2006 feud. To be exact, he actually called her a “big, fat pig.”

This also dates back to the 2006 O’Donnell feud, in an Entertainment Tonight interview that was so over-the-top, they declined to air it:

Rosie O’Donnell is disgusting—both inside and out. If you take a look at her, she’s a slob. How does she even get on television? If I were running The View, I’d fire Rosie. I’d look her right in that fat, ugly face of hers and say, ‘Rosie, you’re fired.’ We’re all a little chubby but Rosie’s just worse than most of us. But it’s not the chubbiness—Rosie is a very unattractive person, both inside and out.

As Kelly pointed out, not all of Trump’s sexist remarks were targeting O’Donnell. This insult was reserved for Arianna Huffington.

"@laurasgoldman: .@realDonaldTrump why is it necessary to comment on .@ariannahuff looks? Because she is a dog who wrongfully comments on me

I can’t dig up any evidence that Trump ever used those two words in that exact order, but Trump has definitely called O’Donnell both an “animal” and “disgusting” in the same breath. So saying that Trump called a woman a “disgusting animal” seems like a fair interpretation of his remarks during the feud.

In addition, Trump reportedly called a female lawyer “disgusting” for breastfeeding in front of him, but Trump has disputed that account.

See the above Huffington tweet for just one example.

“You once told a contestant on Celebrity Apprentice it would be a pretty picture to see her on her knees.”

In 2011, Trump told former Playboy Playmate and Celebrity Apprentice: All-Stars contestant Brande Roderick, “It must be a pretty picture. You dropping to your knees.”