‘You Are Politicizing It!’: Don Lemon Berates Trump Supporter for Attacking Dems on Orlando 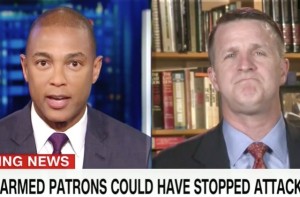 CNN’s Don Lemon got pretty terse with a Trump supporter tonight for how he went after the Democrats for their reaction to Orlando.

After showing a clip of Trump calling the gunman a “son of a bitch” and mimicking someone shooting at his head, Lemon asked Ken McKay if Trump is being insensitive in the wake of the tragedy.

McKay said no, and then proceeded to rip liberals for their “disgustingly political” reaction by invoking guns. But that set off Lemon, who said he has spoken to many families of victims who are tired of the partisan fighting and just want to see something done:

“Every time I go to one of these things and I sit with families who have lost loved ones and they stare me in the eyes and they’re crying… and they’re telling me that they cannot sleep at night, they cannot do anything, they’re tired of turning on the television and hearing people bickering about left vs right when it comes to guns. They don’t care if it was a terrorist act! They don’t care if it was an act of hate! They don’t care what it is, their loved one is dead and they want something done about it!”

He told McKay, “By saying that this is a Democratic thing, you are politicizing it! That does not have to be your first response!”

You can see how McKay responded in the video above, via CNN.