You Can All Stop Hating the How I Met Your Mother Ending Now, Because Someone Re-Did It
video

You Can All Stop Hating the How I Met Your Mother Ending Now, Because Someone Re-Did It 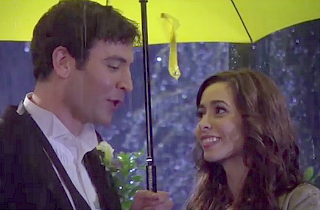 Many moons ago, I heard about a type of psychological therapy that helps people erase some bad memories by essentially re-writing them. If you just imagine that you hadn’t experienced xyz embarrassing moment in front of your peers, perhaps maybe you won’t look so unfavorably upon that point in your life.

Maybe that was the mindset behind someone “fixing” the much-maligned How I Met Your Mother finale.

To recap: Lots and lots of people hated how the CBS sitcom concluded on Monday evening. The titular mother was discovered in a fairytale way, only to be conveniently killed off so that lead character Ted Mosby could awkwardly ask his future children if he could bang “Aunt” Robin, his first love in the show (and one viewers were told from the outset would not become the “mother”).

The anger directed at the nine-season-long show for its sloppy “twist” ending, led to some clever Internet slave editing down the final moments of the series to simply end on a beautiful note — one where the mother is discovered and all makes sense. No one conveniently dies without more than a short glimpse of her in a hospital bed; no divorce occurs to an already terribly-conceived marriage.

(Also: I don’t watch the show, so I had no idea the Walkmen’s “Heaven” scored the closing credits of the series. Pretty cool to learn that now. Good for them.)

Watch below, HIMYM fans, and maybe your memories will change: