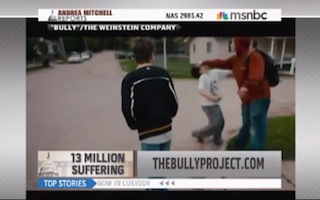 Following the revelations that the Kony 2012 campaign had a few problems with it (including the fact that it’s organized by a guy who claims his middle name is “Radical”), a new cause célèbre is bubbling up in the the Facebook newsfeeds of every single person you know: the fight to overturn the rating of the new documentary Bully. The film demonstrates the country’s bullying epidemic by following the lives of some real American students. Unfortunately, the MPAA has slapped Bully with an R rating so as to protect children from the naughty words that Bully proves they’re all already saying. Now a campaign has begun to get the rating dropped to a PG-13. However, while this effort is noble, it may be missing the point.

First, let’s get the cynical reasons for this campaign out of the way. The big brouhaha over Bully‘s rating didn’t begin until the movie’s distributor Harvey Weinstein created a big stink about it. This is the third fight Weinstein’s gotten into with the MPAA in about a year following his disputes over the similarly harsh ratings for Blue Valentine and The King’s Speech. However, just last year, Weinstein had absolutely no problem re-editing The King’s Speech to get it an extra PG-13 release despite the objections of all the creatives actually involved in making the movie. Maybe I’m just being cynical, but I’d have to wager that the only reason the Hollywood mogul isn’t doing that now is because the little documentary can get 100 times more press by standing firm.

But, fine, let’s try not to be cynical. After all, all the press on the Bully campaign is focusing on the idea that it was begun not by a Hollywood bigwig, but by a student: Michigan teenager Katy Butler. Butler created a petition to change the movie’s rating and it has now reached nearly 300,000 signatures.

In the description of the petition, Butler puts forth a number of good reasons why the rating should be lowered. However, they are also the wrong reasons:

“I just heard that the Motion Picture Association of America has given an ‘R’ rating to ‘Bully’ — a new film coming out soon that documents the epidemic of bullying in American schools. Because of the R rating, most kids won’t get to see this film. No one under 17 will be allowed to see the movie, and the film won’t be allowed to be screened in American middle schools or high schools.

I can’t believe the MPAA is blocking millions of teenagers from seeing a movie that could change — and, in some cases, save — their lives. According to the film’s website, over 13 million kids will be bullied this year alone. Think of how many of these kids could benefit from seeing this film, especially if it is shown in schools?”

The celebrities and Congress members who have taken up the cause echoe Butler’s argument that the movie is too important to get an R rating. To any of us who believe that bullying is a huge problem, this may make complete sense. However, we need to realize that creating a precedent in which a government organization gets to subjectively choose and regulate which pieces of art are more “important” than others is an incredibly slippery slope.

Let’s get this straight; I hate the MPAA. I think it’s an incredibly broken system. I mean, why on earth should a movie like Bully get an R because (reportedly) a kid says “fuck” six times while dozens of PG-13-rated summer blockbusters get their hundreds of violent deaths through without incident? But the MPAA’s arbitrariness shouldn’t be combated by making it more subjective. The conspicuously secretive organization’s subjectivity is already a huge problem. Just think about the tons of instances of the group being harsher on gay sex scenes than straight ones and their weird problems with female pleasure. Do we want this flawed group to suddenly start giving preferential treatment to movies that they deem culturally important?

I’m all for using the movie Bully as just another example why the MPAA needs a complete overhaul. However, we shouldn’t be trying to just overturn one stupid rating. We should be trying to fix the system that keeps making stupid ratings. Trying to give this movie special treatment is fighting the symptom when we need to fight the disease.

Below, watch an appearance by Bully‘s director Lee Hirsch on MSNBC discussing his movie and its rating: