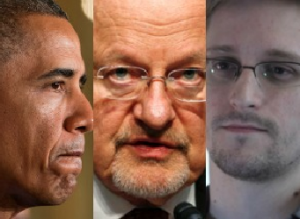 When WikiLeaks first came into the national spotlight, the media was conflicted on what to think of it. Is Julian Assange heroic or treasonous? A journalist or a blogger? Instead of direct engagement on the information leaked, some who wished to discredit it focused on this more superficial debate instead, even going so far as to exploit the character flaws of the WikiLeaker-in-chief. He’s shady! He’s a coward! Assange may very well be a scumbag, but it’s important to distinguish the man from the information, a logical bridge people don’t seem to be able to cross.

I say this to give some context to the way the media is treating NSA leaker Edward Snowden. I have no interest in questioning his motivations or digging up dirt on his past, the focus should be on the information he released and what it says. He may very well end up paying the price for what he’s done in a court of law, but like in the Assange case, the media makes a big mistake by questioning his character in order to undermine the significance of the information he released. He’s a disgruntled employee! He’s a coward! He’s one of those nutty millennial Ron Paul-loving crazies!

This is obnoxious, and the people making these arguments are substituting real debate for character assassination. One of these people is CNN legal analyst Jeffrey Toobin. In his New Yorker column yesterday, Toobin called Snowden a “grandiose narcissist who deserves to be in prison,” among other charges. His whole premise seeks to undermine all this new public information by calling Snowden a scumbag. Again, like Assange, Snowden may very well be a scumbag, but I don’t see how that would be relevant to this discussion at all.

Toobin is joined in his simplistic, paternalistic argument by New York Times columnist David Brooks, whose seems to be less troubled by a massive surveillance program than the the lack of trust in our most sacred institutions; that approaching government with our loyalty instead of our skepticism is just good, common sense. His column is chock full of details about Snowden that attempts to dismiss him as a paranoid millennial whose worldview is dangerous for our national security.

Fox News analyst and former Army Lt. Col. Ralph Peters called Snowden a “high school-dropout thug” and the “national security Kim Kardashian” who deserves the death penalty. Former attorney general Michael Mukasey compared him to Soviet spies, and members of Congress, including Mike Rogers, have said that Snowden just “doesn’t have a clue how this thing works.” That one has been a favorite, with politicians and pundits alike dismissing mere rabble-rousers for being too naive to understand what a complex issue this really is, because we aren’t in the classified intelligence hearings and we don’t know what they know.

But of all the things that all of these people have said, the oddest argument of all has to be something Toobin said on CNN last night, following up on his New Yorker column. He asserted that nothing illegal happened (which is nice, but not really much comfort), and then made this statement.

“There are many good reasons to protest this law. I’m troubled by this law. But I think there are right ways to do it and wrong ways to do it. And by a 29-year-old kid just throwing open the safe and giving away documents that people have devoted years of their lives to creating and protecting, that’s the wrong way to protest this.”

Here’s the video of the full segment (Toobin’s remarks come in around the one-minute mark):

You’ll notice that Toobin is echoed at the end by Lanny Davis, who tries to discredit Ron Paul in the most gallingly ridiculous way possible, before dropping this bit of knowledge.

“Democracy is what Mr. Snowden turned his back on when he did what he decided to do unilaterally being judge and jury, rather than changing his politicians or changing the policies through democracy rather than through leaks.”

Wow. So the NSA is a democratic institution where all you have to do is chat with your immediate superior and PRESTO CHANGE-O IT’S REFORM TIME? Let’s all take a few seconds to think about what would have happened if Snowden had brought his concerns to his supervisor or the guy above that or the guy above that et cetera, et cetera into a near-infinite hierarchy. There are any number of things that could have transpired, not one of which would have been “Hmm, you know what? This Snowden kid may be onto something. Let’s make this thing public!”

Now, we could debate Snowden’s motivations all day long, but the information is out there. There’s nothing we can do about that now. And what’s amazing here is how so many seem to think we can just start these debates like that without realizing we can’t have a debate if we don’t have information about the thing we’re supposed to be debating. But don’t worry, this painfully illogical reasoning is only limited to a few pundits, assorted newspaper writers, and, oh yeah, the President of the United States. Remember how Obama said he looks forward to having this debate? But considering he only took this position after the leak happened, it’s disingenuous for him to say, at best. His administration’s been doing everything they can to avoid these debates, chronicled neatly in this POLITICO piece.

So this is my question to people saying we should be having this debate, but leaks are the wrong way to do it:

How else was this debate supposed to get started?

How would you have liked us to begin this debate, without knowledge of the actual details at play, in a manner that would have actually accomplished something, whilst getting around the gigantic government apparatus that wanted to keep the whole thing hush-hush?

We have national conversations on issues right after big news stories on said issue. That’s kind of the point. Gun regulations after Newtown, fighting terrorism after Boston. The only other things that inspire our national conversations are things in the popular zeitgeist, and unless Dan Brown decides to make Digital Fortress into a movie, how else do you think a conversation about data-mining and phone metadata collection is going to get started?

The government wasn’t going to just come clean. No intelligence official or member of the executive branch, let alone the President of the United States, would want this leaked. Which brings us to the last piece of the puzzle: the aggressive manner in which the Obama administration has gone after leakers, which we should fully expect they will do in this case.

No one can know about it, those who do can’t say anything about it, and if you do, we will go after you with everything we’ve got and call you a traitor. It’s that kind of warm, safe environment where one can expect to have a civilized, calm national conversation.

Oh. And here’s the kicker.

Last year, Ron Wyden and Mark Udall sent a letter to the NSA asking how many people inside the U.S. have been spied on. No information about the scope of such programs, what’s being targeted, etc.; just a definite number of how many Americans are being monitored. Here’s how the NSA responded.

[Inspector General of the Office of the Director of National Intelligence] McCullough told the senators that the NSA inspector general “and NSA leadership agreed that an IG review of the sort suggested would itself violate the privacy of U.S. persons.”

Yes. Even a simple question like “how many people are you watching?” is a threat to national security and cannot be revealed. (Also, the fact that the inspector general caved on this, of all things, tells you Snowden would have gotten nowhere had he gone to McCullough.) Glenn Greenwald attempted to highlight this during an appearance yesterday on Morning Joe, but why let your guest make an important point when you can ask him a simplistic yes-or-no question instead?

Just how the hell are we supposed to have a dialogue on this? Do the people making these arguments honestly believe that one day, everyone in charge of these programs will suddenly do a 180? Government employees are not the Grinch who stole Christmas, their hearts don’t suddenly grow three sizes and make them do the right thing in the end and everyone dances and eats figgy pudding and debates the merits of the surveillance state. At least be honest and say having this debate at all compromises national security. Because if you’re saying we should have a dialogue about this, but not as a result of leaks, what you’re really saying is that we should trust the government to eventually do the right thing and be honest with us.

And you’re calling us naive?