‘You Sort of Put Things Behind You’: Giuliani Comments on Trump Not Pursuing Charges Against Hillary
Video

‘You Sort of Put Things Behind You’: Giuliani Comments on Trump Not Pursuing Charges Against Hillary 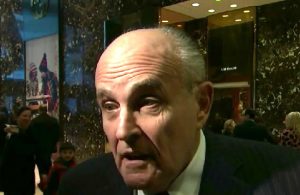 Earlier this morning, Morning Joe broke the story that President-elect Donald Trump would not pursue any further investigations into Hillary Clinton’s use of a private email server or the Clinton Foundation. Campaign manager Kellyanne Conway also appeared on the program and confirmed the report, saying that him saying he doesn’t want to pursue these charges it sends a “very strong message” to the GOP.

Later on in the day, reporters caught up with Trump adviser Rudy Giuliani at Trump Tower to get his take on the news. Giuliani, who has been one of Clinton’s most vocal critics of late and has said multiple times he would have gone after her as a prosecutor, stated that he hadn’t talked about it with Trump but understood if that was his decision.

“If that’s the decision he reached, that’s perfectly consistent with sort of the historical pattern of things come up,” Giuliani stated. “You say a lot of things, even some bad things might happen, and then you sort of put it behind you in order to unite the nation.”

The former New York City mayor pointed out he would be supportive of Trump if he pushed for charges against Clinton, but again said that he appears to be trying to “unite the nation” and that other voters should now give him another chance.

“I think all those people would didn’t vote against him maybe can take another look at him,” Giuliani concluded.