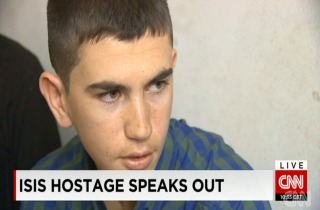 CNN correspondent Arwa Damon, in an interview with a young Syrian Kurd who was kidnapped by ISIS militants four months ago on his way back from school, was shocked when the boy seemed to sympathize with ISIS’s cause.

Merwan Mohammed Hussein told Damon he was “terrified” when ISIS first captured him and his fellow classmates. The militants took the children to a mosque to pray, and held them in a prison-like “primary school” where they would beat, electrocute, and even hang the hostages. They were “entrenched in ISIS’s version of Islam,” Damon said.

Hussein, who told Damon he feared he was going to be killed, said he came to the realization that ISIS doesn’t indiscriminately kill, but rather determines whether the person is an “infidel” beforehand.

The children were also forced to watch ISIS-produced videos of beheadings. Hussein said the videos weren’t meant to “instill fear,” but rather, he said, to tell the “truth” about ISIS, that they “don’t just grab a random person off the street and execute him without evidence — only if they are infidels.”

Asked what he thinks of ISIS, Hussein shocked Damon, his mother and his sister when he said “they are right.”

“Why? What are they doing?” Hussein replied.

Hussein, a Kurd, said the Kurdish fighters are “infidels because of the ISIS flag.” But by the end of the interview, he acknowledged that only “some” ISIS fighters are bad.