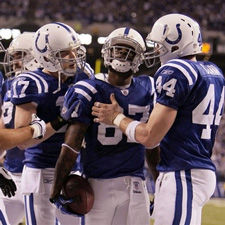 Regardless of the outcomes of the two playoff games this weekend, the Super Bowl will have plenty of compelling story lines. Mediaite presents a four part series where we tell you who’s left in the NFL playoffs, why they matter, and what the media will not stop talking about if they earn a trip to the big game (part two can be found here). Now, we take a look at the Indianapolis Colts.

What You Need To Know: The Colts have been the best and most consistent team all season. Going into their week 16 game against the Jets, in fact, they were perfect. Sporting a 14-0 record, they made the controversial decision to rest their best players for the playoffs. They ended up losing the game, and a chance at becoming the second team ever to go undefeated. Their fans were pissed. Now, a Super Bowl victory is the only way to save face. 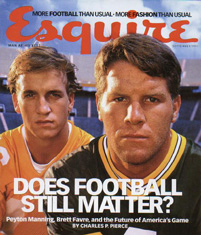 Who Matters: Peyton Manning, this season’s NFL MVP and star of every commercial, ever. Marvin Harrison, who used to be Peyton Manning’s favorite target, but is now suspected of having someone killed. Pierre Garcon, the rookie wide receiver who will be playing while also worrying about missing relatives in Haiti. The Colts front office, who made the decision to pull their starters against the Jets, and effectively cost the team a shot at an undefeated season.

The Potential Angle(s): There will two things that dominate the Super Bowl conversation if the Colts are involved. The first is Peyton Manning’s place among the best quarterbacks of all time, which is at the top if he wins this game. The second is the Colts’ decision to rest their best players in week 16. Even if they win the Super Bowl, their fans will still be left wondering what could have been. And they’ll probably still be pissed.

If They Win, The Media Would Love To See Them Play: Brett Favre and the Minnesota Vikings. There’s nothing that sportswriters salivate over more than a matchup between alltime great QB’s, and this one will have them writing downright creepy things.

If They Win, The Funnest Super Bowl To Watch Them Play Would Be: … against Brett Favre and the Minnesota Vikings. All creepiness aside, this matchup would have so many peripheral incentives to watch that it couldn’t NOT be compelling TV. The game also has a chance to be great, with two high-powered offenses and a combined final score that could be upwards of 70 points.

Next, we finish up our Super Bowl preview with a guide to the Minnesota Vikings. And in case you doubted the marketability of a funny quarterback, check out this clip from Peyton Manning’s SNL appearance.