Your Primary Results With Neil Cavuto: ‘By The End Of Iowa, I Was Like Jerry Lewis At The End Of The Telethon’
INTERVIEW

Your Primary Results With Neil Cavuto: ‘By The End Of Iowa, I Was Like Jerry Lewis At The End Of The Telethon’ 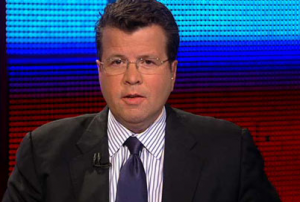 Fox Business Network anchor Neil Cavuto had a very busy Jan. 3, even by his own standards. He hosted his regular show, Your World, at 4 p.m. on Fox News. He then ran over to his other studio to host Fox Business Network’s Cavuto at 6 p.m.. After a quick break, he jumped back behind the desk at 8 p.m. to anchor FBN’s coverage of the Iowa Caucus results. With returns still unclear into the wee hours of the night, Cavuto didn’t sign off until 2:37 a.m. Which leads to the obvious question: Why does a business network care so much about primary elections?

“We can’t not cover this,” Cavuto tells Mediaite. “These issues are so intertwined, if you think about it. That’s why I’m surprised when competitors drop the ball on it.”

Viewers may have noticed CNBC was in tape for both the Iowa Caucus and New Hampshire Primary.

Cavuto admits that he’s a “history wonk” who lives for political drama, and considers the FBN coverage to be “the best of both worlds.” But he also sees it as an opportunity to let viewers know the station is serious about their coverage. He’ll happily opine that the channel doesn’t go left, right, red, or blue: it goes green. Money, and, therefore, business, is a big part of politics. And it’s his job to show that as the results come in.

But what about the overlap with Fox News? Is he supposed to be competing with them or coordinating with them for viewers? Cavuto says that there’s actually a great deal of cooperation between the two networks. The stations figure out, together, when to call most races. In the last election, he went so far as to hold off in calling a couple early results in which Fox News had tabbed a victor because he didn’t feel comfortable declaring a winner, “with just two percent of precincts in.” But his diligence paid off. “At that time, we beat CNBC in ratings,” Cavuto explains. “I think that if you build it, they will come. If you show people you’re serious, they will respond. And this is a work in progress. I know very well when I leave my Fox News show, its a different audience — certainly a smaller audience — but it’s a growing audience.”

One thing Cavuto has learned in this work in progress is not to make promises on air. During the Iowa coverage, he swore he wouldn’t leave the desk until they got a winner. They were planning two hours of coverage — it ended up running six and-a-half. “I get paid a pretty good buck, and I shouldn’t be a lard-ass about it. But by the end of Iowa, I was like Jerry Lewis at the end of the telethon.”

Still, ask Cavuto if he’d do it again (and he will be, next Saturday, with South Carolina’s primary), and he doesn’t hesitate to say yes. “I see rival networks giving a perfunctory, ‘So and so won this primary,’ and then they’re back to a Teflon commercial, or they’re running a seven-year old special, and I think I owe my viewers more. I think that they deserve more. People are into this. And we as a financial network owe it to [our viewers to] be into this ourselves.”