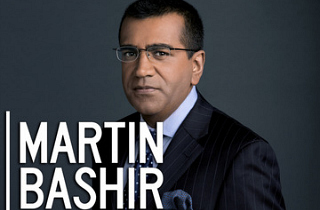 Now that MSNBC’s fiery host Ed Schultz has been replaced in primetime by the more thoughtful Chris Hayes, the media conversation is largely centered around the network’s shift towards wonky, cerebral analysis as opposed to vitriolic bombast.

But among the rest of MSNBC’s weekday lineup, there remains another icon of over-the-top vitriol and “extravagant partisanship”: Martin Bashir‘s 4 p.m. show.

As I wrote back in November, Bashir’s MSNBC show is rife with “recycled talking points” and a “lack of liberal introspectiveness.” Bashir regularly mocks Republicans — who, for the record, often do deserve mockery — but does so in a tone similar to calling them “stupid doody faces” on the playground.

And perhaps the worst part of all is how his rotating handful of liberal guests seem to go out of their way to participate in what I called a “liberal bubble” — incredibly leading questions are served up on a platter and roundly praised, self-scrutiny is near-nonexistent, and dissenting voices are shouted down.

My colleague Tommy Christopher defended the show, noting that “Martin’s show is clearly labeled, and his point of view isn’t just worn on his sleeve, it is his sleeve, nay, his entire shirt, and his necktie, too.”

That’s a fair point. Bashir has absolutely no obligation to regularly include opposing voices on his show. He certainly does not pretend to be the voice of objectivity, and his program airs during that portion of MSNBC’s day where there’s not a doubt in anyone’s mind that it leans liberal.

That being said, there’s nothing remotely intellectually challenging about hearing Bashir lob loaded questions at his guests, almost always getting firm agreement and a pat on the back for making such a great point about Republicans being buffoons or whatever the rage du jour happens to be.

Indeed, Republicans are quite often buffoonish, but hearing it a thousand times from the same ten people over and over again, often without nuance, is, shall we say… a bit tedious.

To be clear, this isn’t just some right-wing criticism of a very liberal television host. Many progressives seem to feel the same way. “I have trouble watching that show after half a day of more rigorous political chatter,” one MSNBC staffer told me on the condition of anonymity. A friend of mine who works at a progressive activism group agreed, noting that the show reminds him of the conservative talking heads on Fox News “coddling each other’s preconceived notions,” but from the left.

Perhaps the most outspoken critic of the show is the absolutely-not-right-wing Guardian columnist Glenn Greenwald, who told me:

One finds more vibrant political debate in the average conference room of the DNC than one does on Bashir’s show. It’s a staple of cable news that regular access to the show depends on one’s eagerness to agree with the host as much as possible, but Bashir lowers this dynamic to never-before-seen depths, where one is obligated not only to flatter all his views but he himself. Almost every segment is like watching parrots in a pet shop compete over who can more faithfully mimic the other. It’s really quite creepy.

But upon further inspection, Greenwald’s claims ring true. By diving into months worth of Bashir’s show, one can easily find a gaggle of guests openly and frequently praising Bashir for his loaded questions which often sound more like fiery soliloquies.

The fawning praise is actually so common that it almost becomes parodical. Want to see? Just take a look at a sample below (and then say aloud, “You’re absolutely right, Andrew!”):