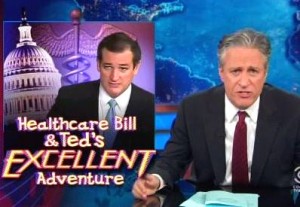 After listening to part of Ted Cruz‘s 21-hour Nazi-invoking filibuster, Jon Stewart was convinced that whatever Cruz was speaking out against must be nothing less than the zombie apocalypse. So he was more than a little confused at how Cruz was going on about Obamacare, mocking Cruz’s constant tangents and his apparent lack of seriousness about really solving America’s health care crisis.

And, of course, the Dr. Seuss.

Cruz pledged to talk until he could stand no more. Stewart shot back, “Easy for you to take that kind of physical risk, you have government health care.”

Stewart went through all the bizarre pop culture references Cruz made, from Ashton Kutcher and Duck Dynasty to White Castle and Star Wars. But what really killed Stewart was Cruz’s somewhat ironic invocation of Green Eggs and Ham.

“So to express your opposition to Obamacare, you go to the book about a stubborn jerk who decides he hates something before he’s tried it, and when he finally gets a taste, he has to admit after he’s tasted it, ‘This is pretty fucking good.'”