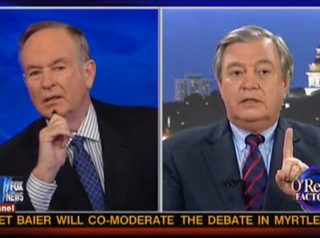 South Carolina Democratic Party Chair Dick Harpootlian objected earlier in the week on MSNBC to today’s Republican primary debate. Unlike the rest of America, he was not just objecting to the concept of having the watch the same candidates of the past year or so talk about the same things for another two hours– he considered it objectionable to have a debate on Dr. Martin Luther King, Jr. Day and “ignore” the holiday. On tonight’s Bill O’Reilly, Harpootlian began to make the case, but was promptly silenced, jaw agape, as O’Reilly reminded him that the Democrats in his state did the exact same thing in 2008.

“Are you offended?” O’Reilly asked Harpootlian, who replied that he was not, but that he found the fact that Republicans had “no outreach to African Americans” a problem “in a state where we have an African-American Republican Congressman.” “Adding insult to injury, this debate ignoring Martin Luther King’s birthday!” he added, which made O’Reilly ask who was ignoring the debate and why. The Republicans, Harpootlian replied, because “no one has raised any issue with Fox about it being appropriate or inappropriate.”

O’Reilly then asked whether there was a reason for this– namely, something that happened in 2008. Harpootlian did not remember what happened in 2008 (a Democratic primary debate on Dr. Martin Luther King, Jr. Day) and who sponsored it (the Congressional Black Caucus), which prompted several awkward seconds where Harpootlian was obviously caught flat-footed. With this development, O’Reilly then told him that, “by injecting race into this, you do a disservice.” Harpootlian finally replied, blaming Republicans for injecting race into the matter by calling this “the most important election since 1860.” “We in the South have a little different version of that election,” he noted, suggesting that talking to Southerners in such a way was a sort of dog whistle. O’Reilly disagreed and just asked Harpootlian to give it up, adding, “you’re getting killed here!”