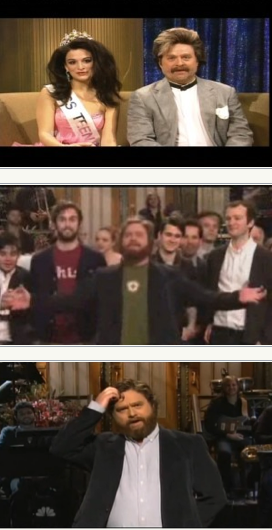 In case you were wondering: Yes, Zach Galifianakis shaved his beard while hosting SNL. He didn’t do it on live TV, but he definitely did it, presumably during the second song performed by musical guest Vampire Weekend. How can we be so sure? Well, besides the fact that he was beardless for the next “Pageant Show” sketch, there’s the beard he turned up with for the goodbyes. Sure, the SNL makeup department is legendary and could have fixed him up to look beardless when he was, in fact, not (even with that hairy bulk underneath), but what they seemed to have done is just given him a brand-new beard that looked just like his old one….almost.

Observe the three screengrabs to the side. You’ve already seen Galifianakis during the monologue, with an authentically hairy face. In the screengrab at the top, he is far less hirsute, though rocking lovely ice-blonde highlights in his wig. Yet during the closing goodbyes (2nd screengrab), the beard is back! Perhaps he never shaved at all? Nope — because peep this third screengrab, and note the key difference: The mustache and the beard are TOUCHING. Together, they form an unbroken world of hair around his lips, yet in grab #2, there is a space between them. Yep, go us, we cracked this beard thing wide open. Anyway: It’s not like we’re the first ones to notice (hi, Twitter!).

p.s. We have not checked with anyone at SNL yet about this beard thing. It’s 2 am, people. But we’ve put in an email to a few insiders to confirm our hypothesis (i.e. the mid-Vampire Weekend backstage shave-fest). Yes, he could have been wearing a fake beard for the entire show. But somehow, that doesn’t seem to gel with the larger Galifianakis feel. The verite backstage shave-a-thon feels far more authentic, and will be just one more reason that his hosting gig will go down as one of the best in recent memory. Also, Frank Rich! Mute, no less, which will surely please our friends at Newsbusters.