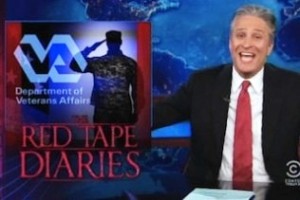 Thursday night on The Daily Show, Jon Stewart revisited a topic that doesn’t get much attention in the media: the massive backlog of Veterans Affairs claims. To truly get to the bottom of the estimated backlog of 900,000 claims, Stewart and his Daily Show team presented the epic saga of “Zero Dark 900,000.”

To explain the situation, Stewart turned to “correspondent” Brian Williams, who reported, “after two wars in which they were asked to sacrifice so much for their country, many veterans are now returning home to wait years for the benefits they were promised.” The only progress the VA has managed to accomplish since Stewart last covered the topic is that the senior officials overseeing the claims will no longer be receiving bonuses. “I mean to have the government promise you a benefit and then, you know, not deliver it, well–I can’t imagine anyone else even knows what that must feel like.”

Stewart noticed one “alarming” detail in the presentation the VA created to address the issue, in which they say the “enemy is paper.” Now that paper has been deemed an “enemy combatant,” Stewart concluded, “these records can now be held for indefinite periods in a kind of bureaucratic black site limbo–a kind of paper Gitmo.”

For a more in depth look at the VA’s problems, Stewart sent Samantha Bee into the field to do what she could to uncover at least one man’s missing VA claim. Embodying Zero Dark Thirty‘s Maya, Bee set out on her epic journey to “Q’ueens” for the “greatest paper hunt of all time.”

Eventually, her quest brought her to a “TDS black site” where she interrogated “VA sympathizer” Kayla Williams with her own brand of torture techniques from “cheese-boarding” to “long-form improv.” By the end, Bee’s own Daily Show SEAL Team 6 strapped on their night-vision goggles and raided the Manhattan VA office in a tense and thrilling climax that you will have to see to believe.

Watch video below, via Comedy Central, in two parts: