Zimmerman Attorneys Reveal George Zimmerman Is Not In Florida, And Much More
video

Zimmerman Attorneys Reveal George Zimmerman Is Not In Florida, And Much More 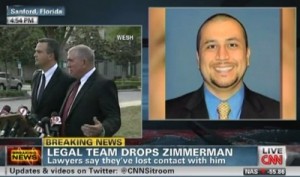 After calling a press conference announcing they were withdrawing as Trayvon Martin shooter George Zimmerman‘s counsel, attorneys Craig Sonner and Hal Uhrig took  questions from the media. Among the revelations at that bombshell press conference called is the fact that Zimmerman is still in the U.S., but not in Florida. Uhrig told reporters who were looking for Zimmerman like an “Easter egg hunt” to “stop looking in Florida, look much further away.”

In other comments, Sonner and Uhrig expressed confidence that, if asked to, George Zimmerman would turn himself in, but they also made it clear that, even as withdrawn counsel, they are still staunch advocates for George Zimmerman.

The news that Zimmerman has cut off contact with his attorneys could force Special Prosecutor Angela Corey to make a quicker decision on whether or not to charge Zimmerman. As CNN’s Jeffrey Toobin slangily pointed out, without attorneys to assure his surrender, Zimmerman could soon be “in the wind.”

Other significant revelations from that press conference include: