Zimmerman Friend Joe Oliver Tells Hannity Sanford PD Has A ‘History,’ But ‘George Is Not A Racist’
video

Zimmerman Friend Joe Oliver Tells Hannity Sanford PD Has A ‘History,’ But ‘George Is Not A Racist’ 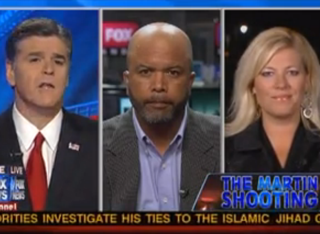 As the story of the shooting of Trayvon Martin has developed, shooter George Zimmerman‘s side of the story have begun to surface. On tonight’s program, Sean Hannity interviewed Zimmerman friend and former CNN reporter Joe Oliver and Fox reporter Shannon Butler— who spoke to a witness that defended Zimmerman– on the new evidence that may help Zimmerman’s case.

RELATED: Bernie Goldberg To O’Reilly: If Zimmerman Were Black, ‘We Wouldn’t Know The Name Trayvon Martin’

Butler noted that she spoke to that witness, “John,” shortly after the shooting happened and he had said he saw Martin as the aggressor until the gun went off. Oliver noted that a large problem with the investigation was the lack of information. “There hasn’t been enough info out there to get a clear picture of what happened,” he argued, particularly about what happened, “from the time George said ‘Okay’ after being told he didn’t have to follow Trayvon until the time someone saw Trayvon on top of George.” He added that there wasn’t proof that Zimmerman had followed Martin against the orders of the 911 operator, since he says “okay” in response to the command. Oliver believed Zimmerman was “returning to his vehicle wen he was confronted by Trayvon.”

Oliver did understand the public outcry, however. “Given the history of Sanford police… and early claims that George is white,” Oliver noted, “if I didn’t know George, or the history of the Sanford police department… I would be screaming for an arrest like everyone else.”