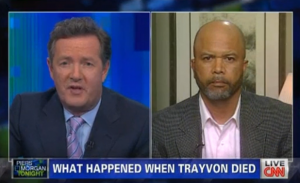 On Tuesday night, Piers Morgan sat down with Joe Oliver, George Zimmerman‘s friend who has been defending Zimmerman’s side of the story in the Trayvon Martin case. Oliver underlined that the incident had nothing to do with race — and that Zimmerman is a good man who was trying to do the right thing, but “something horribly wrong happened.”

Offering condolences to Martin’s family, Oliver said, “I can’t imagine what it was like to get that news.” He went on: “I believe what has happened has, from the very beginning, been mischaracterized as a racial incident. And more information is coming out, that is becoming public, that is validating that for a lot of people.

Morgan mentioned new information that’s emerged, like the police report, and asked, “What is the truth as George Zimmerman sees it? […] What do you really believe happened?”

Oliver replied: “I believe what George has told me happened. I don’t understand why all this information is taken so long to come out myself.” As we saw with the Casey Anthony case, he said, “she was essentially convicted before the trial even started. If George had been arrested, then we would have seen more of this evidence come out.”

Morgan asked, “Does he feel it would have been easier now for him to have been arrested?” Oliver said he hadn’t spoken to Zimmerman about that but that Zimmerman’s lawyer says it might have helped get the truth out quicker.

“Forget the racial part of this for a moment,” Morgan said. “The fact that somebody can just shoot a 17-year-old boy who’s armed with just a pack of Skittles, and not even be arrested — doesn’t that say to you there’s something wrong with the law, fundamentally, and it ought to be amended?”

If that’s all this story was, I agree with you 100 percent. If I didn’t know George Zimmerman, I’d be just as outraged as everyone else out there. […] I’ve covered stories like this, where white men have shot and killed a black teenager and claimed self-defense. In this particular instance, I believe that when all of the evidence comes out, this will clearly show this was a case of life or death for either Trayvon or George. And sadly, for the Martin family, it’s Trayvon that we lost. But we’ve also lost George, too. He will never be the same man. He will never be the kind, giving and caring human being that we’ve always known and loved. […] In my heart of hearts, I know that a good man was trying to do the right thing. And something horribly wrong happened.

Morgan then pressed Oliver on Zimmerman’s 911 call. Despite being told not to pursue Martin, Zimmerman did, and with a gun, Morgan pointed out. In hindsight that was a “catastrophic error in judgment, wasn’t it?”

“That’s the story that came out in the very beginning,” Oliver said, “just like the false story that George is a white male, that started all of this firestorm, because of those fears and concerns that there was a white man that was going to get away with killing a black child.”

Oliver said because the information has taken so long to get out “too many people are going to see it as not credible.”

He ended the segment by saying he wanted to make it absolutely clear that this incident had nothing to do with race. “This was not a case of race or profiling,” he said. “This was a case of a man whose neighborhood had been victimized by numerous crimes, and he saw a suspicious individual, and he did what he thought was the right thing. and again, it turned out horribly wrong.”