Zimmerman Judge Walks Out After Attorneys Explode In Late Night Argument: ‘I’m Not Getting Into This’
VIDEO

Zimmerman Judge Walks Out After Attorneys Explode In Late Night Argument: ‘I’m Not Getting Into This’ 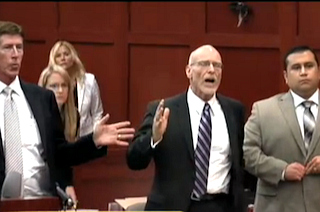 After thirteen hours—the longest day so far of the George Zimmerman trial—Judge Debra Nelson finally walked out of the courtroom Tuesday night, even as attorneys for both sides were still arguing.

Attorneys had been going at it for so long that at one point the lights in the courtroom went out.

Much of the day was taken up debating what would be included in today’s proceedings. The defense wanted both text messages by Trayvon Martin and animation depicting Zimmerman’s version of the events admitted as evidence. But the prosecution argued vociferously against the inclusion of both. “This is a murder trial. This isn’t Casablanca. This isn’t Iron Man,” prosecuting attorney Richard Mantei said.

Tempers then flared over accusations from the defense that the prosecution had withheld evidence that now couldn’t be admitted.

“They made us spend ten, twenty, thirty, one hundred hours digging it out, playing games with us, lying to this court, and now it’s our fault?” defense attorney Don West said.

“I would offer him the opportunity right now to apologize to me for suggesting that I stood by silently with information that I did not have,” prosecutor John Guy responded.

“I’m not getting into this,” Judge Nelson said, picking up her materials. “Court is now in recess.” She left even as the defense was still trying to get a word in.

This morning Judge Nelson ruled against both motions, suspicious of the accuracy of the defense’s animation. “To have an animation go back into jury room that they can play over and over again gives a certain weight to something that this court isn’t exactly certain comports with the evidence presented at trial,” she said.