Zimmerman Prosecutors Address The Media: We ‘Respect’ The Verdict, But Are ‘Disappointed’ With Outcome
video

Zimmerman Prosecutors Address The Media: We ‘Respect’ The Verdict, But Are ‘Disappointed’ With Outcome 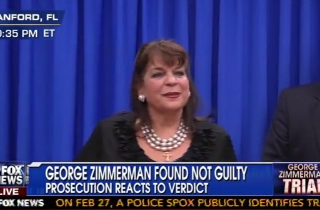 In a press conference following the acquittal of George Zimmerman, Florida State Attorney Angela Corey and prosecuting attorneys Bernie de la Rionda and John Guy addressed the news and expressed their “respect” for the verdict before taking questions about the case.

“Once you found out you could not determine who started that confrontation, why did you decide to go forward because isn’t that a key point of a case like this?” one reporter asked.

“I think we have to go back to the beginning,” responded de la Ronda, “Who was following who? It really boiled down to a kid mining his own business being followed by a stranger. I would submit that’s when it started. I don’t know if that answered your question or not.”

The reporter suggested that de la Ronda was positing a theory about that night, prompting the prosecutor to respond: “That’s not the theory. That’s the facts. The jury obviously disagreed at some point. You’ll be able to inquire them of what they thought. But what it boils down to you have a 17-year-old kid, minding his own business, wearing a hoodie, gets accosted, followed by an individual who wants to be a cop.”

Corey jumped back in to add that “This case has never been about race nor has it ever been about the right to bear arms. Not in the sense of proving this as a criminal case. But Trayvon Martin was profiled. There is no doubt that he was profiled to be a criminal. And if race was one of the aspects in George Zimmerman’s mind, then we believe that we put out the proof necessary to show that Zimmerman did profile Trayvon Martin, but the right to bear arms is the right in which we all believe.”

“But what we want is responsible use when someone feels they have to use a gun to take a life,” she continued. “They have to be responsible in their use and we believe that this case all along was about boundaries and that George Zimmerman exceeded those boundaries.”

In response to the next question, de la Rionda expressed his “respect” for the verdict but emphasized that he is “disappointed” with the outcome. “What matters is what the jury said and I accept it,” he added.

Watch a portion of the presser below, via Fox News: