Zimmerman’s Brother To Piers Morgan: George Will Be ‘Looking Around His Shoulder For The Rest Of His Life’
video

Zimmerman’s Brother To Piers Morgan: George Will Be ‘Looking Around His Shoulder For The Rest Of His Life’ 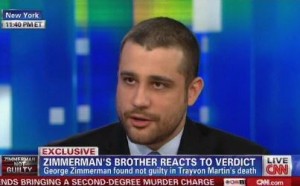 Robert Zimmerman Jr. gave the first post-verdict interview from the Zimmerman family to CNN’s Piers Morgan tonight. Zimmerman told Morgan his family is still processing the verdict and the prospect of George being a free man again. He did not partake in any kind of joy, saying no matter what it’s still a horrible tragedy, but expressed that his brother will be looking over his shoulder for the rest of his free life.

Zimmerman told Morgan he “can’t put into words how relieved we are as a family,” but made it clear this isnot “a time for high-fiving,” because Trayvon Martin lost his life and that’s a tragedy even if it was not murder. He said his entire family is glad they are no longer on the other end of a “mountain of misinformation.”

RELATED: Piers Grills Robert Zimmerman: ‘You Actually Think Trayvon Was Going To Beat Your Brother To Death With Bare Hands?’

Morgan noted how Zimmerman is now entering a world where “many people despise him,” asking, “Does he fear for his safety?” Zimmerman said his brother always has, but now “he’s gonna be looking around his shoulder for the rest of his life.” He expressed concerns about people “who would want to take the law into their own hands” instead of respecting the verdict.

He also dismissed the idea that no one has “been made accountable” for Martin’s death, and slammed all the “conjecture and speculation… dominating the conversation” leading up to tonight’s verdict.

Zimmerman also pointed out that there’s a lot of black-on-black crime that doesn’t get prosecuted, and scolded people trashing his brother in the media. Morgan pushed back a little, arguing that some of that happened because Martin was unarmed, but Zimmerman insisted he was armed with the sidewalk and his “nose-breaking fists.”