Zimmerman’s Father Testifies In Bond Hearing: George Would ‘Turn The Other Cheek’; ‘Absolutely’ Not Violent 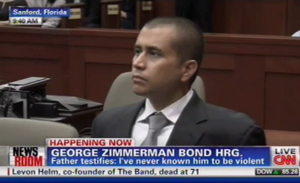 George Zimmerman‘s father, Robert Zimmerman, testified at his son’s bond hearing on Friday. Both of Zimmerman’s parents gave testimonies, as the judge decides whether to set bail. Zimmerman’s father said he had never known his son to be violent: he would “turn the other cheek.”

Robert Zimmerman told the court he’s a disabled veteran who doesn’t have much income. His wife is retired, and they have little savings. But, he said, they’d be willing to pledge the equity/take out a second mortgage on their home for George’s bond.

He said his son “absolutely” is not a violent person. “I have never known him to be violent at all unless he was provoked, and then he would turn the other cheek,” he said.

Additionally, he said didn’t read arrest report from 2005 but knew of his son’ involvement in neighborhood watch. He told the court he knows about a violent incident with his son and “alcoholic beverage control officers in plain clothes.” Asked whether George “turned the other cheek” then, Robert said, “Well, he did” — but George’s friend, he said, was “was grabbed and thrown up against a wall by some people in civilian clothes.”

In terms of the fundraising website, he said he is aware of it, but isn’t sure about where the money has been going — or who is running it.

Speaking more about his son’s character, Robert said he taught son to respect law. George has always taken an interest in criminal justice, he said: “Sometime in his life he’d like to be a magistrate or a judge.” He said he knew about George’s past anger management classes, but did not attend any with him. Asked whether he believe his son has anger management problems, he said, “No, I do not.”

“I haven’t had much contact with my son since his head was beaten,” he said. He noted that he saw a photo of his son’s injuries for the first time today on the news.

Take a look at his testimony, via CNN: