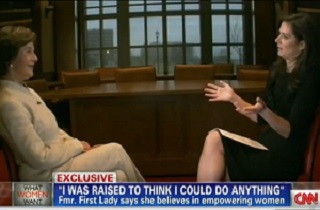 The 2012 election did produce a lot of Republican candidates who were frightening to women, from Todd “Legitimate Rape” Akin (R-MO), to Richard “God-Intended Rape Babies” Mourdock (R-IN), and even to Rep. Paul “Forcible Rape, Not The Other Kind” Ryan. Even their presidential nominee, a man named Mitt Romney, kinda flirted with the idea of criminalizing birth control. On CNN’s OutFront Monday night, former First Lady Laura Bush acknowledged that scary field, and seemed to say she was glad for it.

That certainly seems to be the impression she gave CNN, whose pitch email for the clip describes Mrs. Bush’s exchange with Erin Burnett this way:

In addition the former First Lady talk to Burnett about the gender gap in her party and 2012 election saying that there were “obvious examples of candidates that I think frightened some women, but they were the exception rather than the norm.” She went on to say, “I’m glad that in our party we have room for all of them.”

Well, that’s a weird thing to say, or at least, for a Republican to say. In fairness to Laura Bush, that may not have been what she meant. Both of those quotes are from the clip, but there’s a little bit of context missing. The problem is, the context doesn’t really clear things up all that much. Burnett asks, “Obviously last time, more than half the women voted for President Obama, in part because of abortion, gay marriage, issues like that. Do you think the Republican Party has made a mistake in doubling down on those issues, and making social issues so central to the platform?”

“Well no, I wouldn’?t say that, necessarily, and every candidate was different,” Mrs. Bush replied. “There were obvious examples of candidates that I think frightened some women. But they were the exception rather than the norm, in the party, and you know, all of those social issues are very, very heartfelt by people. And I understand that, there are differences, and people you know, there just will be. And I?’m glad that, in our party, we have room for all of them.”

Now, my read of that is that Laura Bush is glad the Republican Party has room for “all of them” differences on social issues, but then, that would also seem to include hot messes like Todd Akin, so maybe CNN isn’t being unfair to her at all. On both counts, I agree with her; I’m glad there is still room in the Republican Party for the Todd Akins of the world, and I’m glad there’s room for “differences” on social issues, like whether to force you to carry your rape baby, or just decide you weren’t really raped.