Sally Kohn: If Trump is Nominee, Dems Will Vote to ‘Stop Us From Becoming Nazi Germany’
video

Sally Kohn: If Trump is Nominee, Dems Will Vote to ‘Stop Us From Becoming Nazi Germany’ 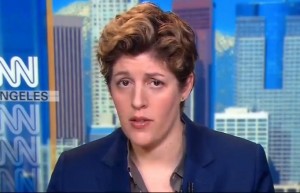 Commentator Sally Kohn said on CNN’s New Day Wednesday that Democratic voters may not have been particularly inspired to vote for either of the two primary candidates, but they were more likely to turn out in November in order to defeat Donald Trump because the stakes were higher. A vote against Trump, she said, was a vote “stopping us from becoming Nazi Germany.”

Kohn’s remarks followed a discussion of the fact that Democratic turnout is way down and Republican turnout is way up since the parties’ most recent respective nominating contests. Asked if that negatively impacted the party’s prospects in November, Kohn replied that Democrats had not been taking Trump seriously for the early months of the race. But now, she said, “he looks like he’s going to win. And, to be honest, that’s the biggest motivator, is people have to actually feel something is at stake.” She continued:

If they’re not motivated to vote for, you know, the guy with the progressive economic message that really would finally make this country work for everyone or the woman who’s running with the impeccable and vast record of experience, if that’s not enough for people, at least stopping us from being Nazi Germany would hopefully get Democrats and others to turn out.

Co-host Alisyn Camerota quickly turned the conversation to the other guest, Hilary Rosen, who roughly agreed with Kohn but was perhaps less incendiary in her choice of words: “I think it was W.C. Fields who said that ‘I don’t vote for anybody, just against,'” she said.

Kohn is hardly the first commentator or newspaper to have made comparisons between the GOP frontrunner and fascism, and lately, Trump has come under increased scrutiny for courting the support of white supremacists.