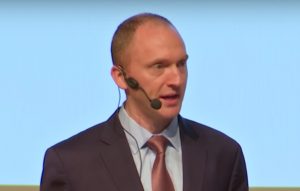 Carter Page is one of Donald Trump‘s foreign policy advisers. All summer, his possible ties to the Kremlin have been a talking point, but according to Yahoo! News, now, U.S. intelligence officials are probing the relationship between the two.

Here’s how they explained it:

U.S. intelligence officials are seeking to determine whether an American businessman identified by Donald Trump as one of his foreign policy advisers has opened up private communications with senior Russian officials — including talks about the possible lifting of economic sanctions if the Republican nominee becomes president, according to multiple sources who have been briefed on the issue.

So, who is this guy?

Well, for starters, he’s a businessman who Yahoo! says has “extensive business interests in Russia.” They were likely referring to the fact that he is a consultant to and investor in the Kremlin’s state-run gas company, Gazprom, which means he would stand to gain in a big way if sanctions were lifted. The Washington Post calls him a “longtime energy executive.” He’s a graduate of the U.S. Naval Academy who worked at Merrill Lynch before founding his own firm, Global Energy Capital.

In July, he traveled to Moscow to give speeches about the United States’ foreign policy. Upon his return to America, the GOP adopted a “more Russia-friendly” platform. Here’s what Huffington Post said at the time:

The week after Page’s speeches, Trump operatives persuaded Republican Party convention delegates to drop from the party’s platform a call to send arms to Ukraine to help defend the country following Russia’s 2014 occupation and subsequent annexation of the Crimean peninsula.

In September of 2014, he wrote an article that criticized NATO for provoking Russia. More recently, the National Review described him as an “out-and-out Putinite.”

Few details about his personal life are known beyond that.