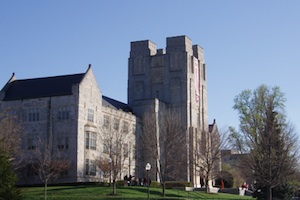 According to the Virginia Tech website, the shooting suspect is being described as “white male, with gray sweat pants, gray hat, with neon green brim, maroon hoodie and backpack and he was walking toward the McComas building.”

Update: NEWS7 reporter Karen Kiley is reporting that a police officer is the one who has been shot. Another person has been reported shot as well. 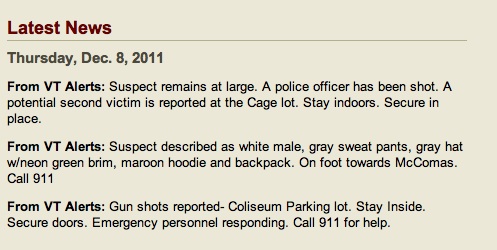 Update 3: Suspect remains at large. Blacksburg Transit has been suspended.

Update 4: Campus is on lockdown.

Update 5: The Collegiate Times is now reporting person who surrendered at Performance Arts Building is not under arrest.

Update 6: Reuters is reporting 2 people have died from the shooting.

Update 7: Campus is still on lockdown. Shooter’s status is unknown.

Virginia Tech’s website has new updates on the situation:

Shortly after noon today, a Virginia Tech police officer stopped a vehicle on campus during a routine traffic stop in the Coliseum parking lot near McComas Hall

During the traffic stop. the officer was shot and killed. There were witnesses to this shooting.

Witnesses reported to police the shooter fled on foot heading toward the Cage, a parking lot near Duck Pond Drive. At that parking lot, a second person was found. That person is also deceased.

Several law enforcement agencies have responded to assist. Virginia State Police has been requested to take lead in the investigation