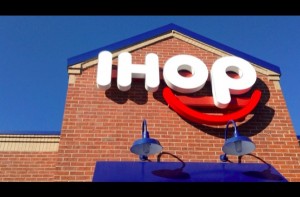 Come for the bottomless pancakes, stay for the terribly unfortunate customer service slip-up.

An African-American couple in Austin, Texas was stunned to find the distinction “BLACK PPL” on their check at the end of their meal this week. Rolman Sparkman and his girlfriend Arainia Brown went to an IHOP on Monday for a meal to find a rather, uh, unfortunate way that the restaurant decided to identify the couple sitting in the booth.

The strangest part of the story, by Brown’s account, is that the waiter — identified by the name tag “Dwayne” — is also black.

Dwayne Williams later apologized on his Facebook page for the incident, saying that the moniker was simply used to identify the duo while in a rush to get orders out to customers in the restaurant.

This was a poor choice made by our franchisee’s team member, and is not in keeping with policies and procedures. We recognize that it could be offensive and sincerely apologize. Everyone is welcome in our restaurants and our franchisee is using this as a teachable moment for the entire team so that it will not reoccur.

Watch the above report from Fox 7-Austin.
[image via Flickr]